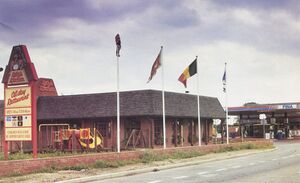 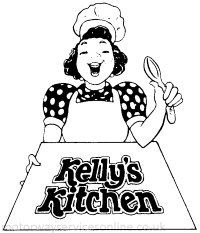 Kelly's Kitchen was a waitress service restaurant chain. It started in 1987, and had reached 16 branches by the end of 1989.

They were developed by Norfolk House and Petrofina, between them providing food and fuel. In order to rival Forte's Little Chef, the restaurants had to be developed fast, and they quickly appeared at junctions along major A-roads.

Their aim was to be the UK's second-biggest roadside restaurant chain. Their first two branches were at Fradley in the West Midlands, but the company's main target area was the South East.

The brand was purchased by Crest Hotels, a Bass company. Subsequently hotels were proposed alongside Kelly's Kitchens, which opened under the brand Highway Lodge, with many more planned. Crest Hotels were themselves purchased by Trusthouse Forte in August 1990.

Under that deal, Forte changed all these restaurants to become Little Chefs, ending the very short-lived rivalry. Forte appeared to be mainly interested in using the deal to expand Travelodge, using the land that Highway Lodge had been planning to use.

Given how quickly they had expanded, it's not surprising that Kelly's Kitchen had a number of outstanding planning applications which hadn't been followed up on. The ones which were still in the early stages were dropped in 1991 while the ones which had been finalised were included in the sale, and taken forwards. It's likely that some restaurants were changed to a Little Chef moments before they opened.

Their restaurants were all built to the same style with redbrick buildings, traditional cottage-style windows, tiled roofs which came down over the tops of the external walls, and large funnel-like chimneys. Inside it was more upmarket than most other diners, and the kitchen was designed to be in full view of the restaurant.

Restaurateur visited one Kelly's Kitchen in March 1989, and reported that they watched all the food being placed in a microwave. They described the menu as "interesting and unusual", but felt that it was too ambitious, and the food was poor as a result.

The following Little Chef restaurants were built in the Kelly's Kitchen style. It is likely that they started out as Kelly's Kitchen, but there is the possibility that some of them had been sold and re-branded before they opened.

Kelly's Kitchen restaurants were planned to open at:

Norfolk House and Petrofina planned a number of services around this time which were never built. Some examples which have been found are: