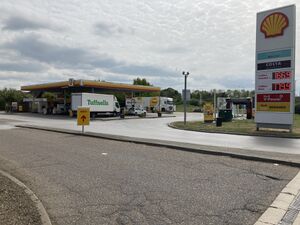 A strange combination of two service areas. The official service area is the McDonald's and petrol station, but there is an additional Premier Inn and Brewers Fayre positioned down an adjacent entrance, albeit at the end of a long driveway.

No HGV parking is available at either facility. 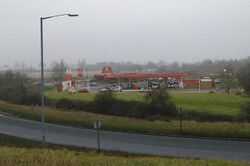 The service area as a Little Chef and Total, pictured in 2008.

The original part of the service area was developed by Kelly's Kitchen and Petrofina in late 1988, at a cost of £1.5 million, at what is known locally as the Pullover Roundabout.

Kelly's Kitchen became the West Lynn branch of Little Chef almost immediately. In February 2012, it was deemed to be under-performing and closed. In 2013, the restaurant reopened as a McDonald's Drive Thru.

Meanwhile there was another branch about two miles to the east. The King's Lynn branch of Little Chef opened about a year earlier, probably hoping to compete with Kelly's Kitchen. It lasted until 1996 when it was closed in favour of the larger West Lynn branch (although the King's Lynn branch was briefly brought back as a Burger King).

Plans for a new development, known as 'Freebridge Park', were granted permission in April 2019 which utilises the land surrounding the hotel access road adjacent to the service area. These plans include 6 retail units, 4 industrial units and 2 drive-thru units situated directly behind the McDonald's restaurant adjacent to Clenchwarton Road, named on the plans as a Costa Drive Thru and a KFC Drive Thru.

Further plans were submitted in October 2020 for the north-east corner of the development to be developed into a new Highways England depot with salt barn as opposed to the 6 retail units that were proposed in the 2018 application. A decision is set to be made on this application in Summer 2021.

This is not the first time that this land had been earmarked for development, as a lorry park has been planned as far back as 1992. While Freebridge Park isn't officially the service area, it is universally known as 'Freebridge services'.

The first part of the development, the Costa Drive Thru, opened in May 2021.