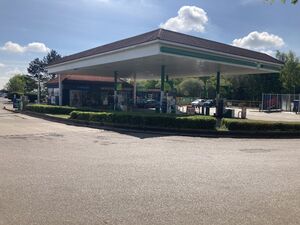 A petrol station and McDonald's at a small roundabout to the east of Swaffham.

The filling station here was formerly operated by Malthurst. Malthurst later merged with MRH who added their own-brand Hursts store to the site.

The McDonald's restaurant received a major refurbishment in 2009 which saw new outdoor seating areas added. The drive-thru lane was also re-configured in summer 2016, with the site reopening on 22 September 2016. The car park was also extended at this point to utilise previous unused land.

MFG demolished the car wash here in October 2021 and began adding a new extension to the sales building. The site reopened on 9 December 2021 with a new Londis store, a new Greggs store and 2 new jet wash bays. During the works, shop facilities were provided in a portable building. The petrol station is one of 87 petrol stations that MFG intends to sell in 2022 under a deal with the Competition and Markets Authority.

The service area here is not connected to the Swaffham branch of Little Chef, built several miles west of here at Swaffham Heath.