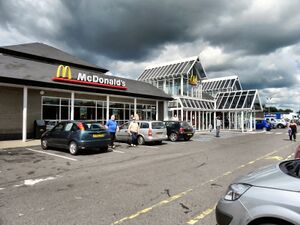 No photos tagged with Margram at services. If you have one, why not upload it?

Margram formed in 1977 as a forecourt developer. They built local petrol stations which opened under an oil company's branding.

By the 1990s, their sites were growing considerably, and often included a Supermart shop with Cuisine de France or Costa Coffee. They started opening in partnership with food or hotel units such as Little Chef, Travelodge and McDonald's.

Of particular interest to this website is that Margram had grown so much they were able to develop two motorway service areas. These had larger amenity buildings, but they were clearly divided into segments with a different door for each. Margram had to pick an operator name to be displayed on the main signs, and they chose to use the McDonald's brand, rather than their own.

The following signposted service areas were known to have been developed by Margram:

The following motorway service station was known to be planned by Margram but it was never built: