A21 by the Tunbridge Wells Bypass

The former Blue Boys Pub stands next to this petrol station.

Parking and use of the bp forecourt is limited to 30 minutes maximum stay and is strictly enforced by MET Parking.

The pub before the service area was built.

The Blue Boys Inn Pub was based on a 16th century farmhouse, becoming registered as an ale house in 1736. It offered refreshment and repairs at the start of the turnpike. The pub was apparently named after the uniform of King George IV's outriders, who sought assistance at the Inn after the King's coach shed a wheel. In the 1950s coach parking (labelled on maps as a 'coach station') was provided behind the pub.

In the late 1980s the coach parking became a motorhome site. After 1994, several plans were made by Aquaries Investments and Margram to build a service station here. One of the plans involved building a restaurant in the pub car park, while another planned a drive thru restaurant in the north-east corner.

The sudden need for the services came from the opening of the Tunbridge Wells Bypass to Kipping's Cross, which left very few petrol stations on the A21. The site eventually opened in 2006 named Tunbridge Wells services as one of BP's BP Connect sites featuring a Wild Bean Café, and included the construction of a new roundabout named Blue Boys.

In May 2020, McDonald's submitted plans to build a McDonald's Drive Thru here for the second time, this time by building on the existing filling station car park. This plan was withdrawn in July 2020 following strong objections from neighbouring residents and businesses.

MFG then proposed building 10 electric vehicle charging points and a new-build Greggs on land to the east of the service area, by the exit. This would have created an unusual situation where two rivals (MFG and BP Express) will together be providing different facilities at the same service area. MFG's proposal is currently on hold.

As well as the charging points, there will also be four jet wash bays, and three air, water and vacuum bays, making this effectively a full forecourt for electric vehicle drivers.

Future of the Blue Boys Inn 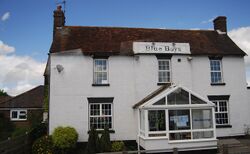 In the early 2000s, the pub went on to become Monsoon Spice. This closed in around 2008. In 2009, the car park gained a hand car wash and snack bar. In 2011, the site then became Blue Boys Café with the hand car wash remaining and the snack bar being removed. Both the café and hand car wash closed a year later with the building becoming heavily dilapidated.

Since the closure in 2012, several plans have been made to make use of the pub. In 2013, there were two plans: one to adapt the pub to become a drive thru, and the other to demolish it and replace it with a two-storey McDonald's drive thru. Part of the building was demolished in April 2014.

In May 2014 the pub became a Grade II listed building.

It was eventually agreed that the pub could be converted into a Burger King drive thru. This opened on 2 April 2019.