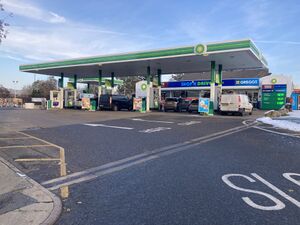 A20 eastbound between London and the M25

A small service area on the eastbound side of the Swanley Bypass.

Customer parking within the bp filling station is limited to 45 minutes maximum stay and is strictly enforced. 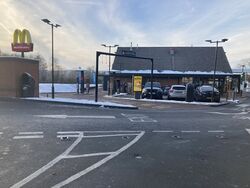 In the 1980s there were several efforts to build a service station on the A20 into London. In 1986, BP proposed one on the westbound side at Petham Court Farm, close to the M25. In 1988 Fina proposed an eastbound petrol station and restaurant somewhere near Swanley, which was rejected. Although Kelly's Kitchen weren't named in the plan, the date and applicant suggests they had been planning another branch here.

The chosen site was a 1930s farm building called Waddon. In 1983, the farm became a scrap yard. The site was purchased by BP in 1988, and turned into Swanley North services, with access from the new A20 bypass. It opened in around 1992 with the McDonald's joining it in 1994.

Another developer tried to build a westbound service area in 1995, slightly east of here, by the railway bridge.

BP later redeveloped the site in 2001, converting the store to one of their BP Connect sites, which gained a Wild Bean Café in the process. The filling station was later acquired by Rontec in 2016, who rebranded the shop to SPAR and replaced the Wild Bean Café with a Subway store.