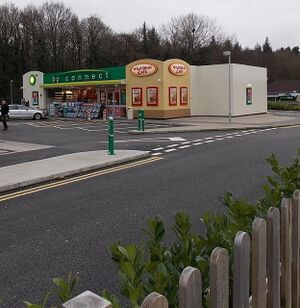 The Wild Bean Café range is more significant in stores which are not branded as M&S Simply Food and includes varieties of sandwiches and wraps, something that the cafés within M&S Simply Food stores don't offer.

Wild Bean Café was first founded in 2000 alongside BP Connect. These two brands were created as BP had inherited several independent filling stations, and found it more profitable to include a different branded store and a small café at each site instead of an unnamed shop and self-service coffee machine.

By having a café with staff rather than just a self-service machine, BP could charge more for each item. This trial was deemed successful and Wild Bean Café can now be found at over 400 BP filling stations in the UK.

In 2006, BP improved this offering by trialling franchised M&S Simply Food stores at eleven of their sites, which was later extended. Today, there are over 250 M&S stores alongside Wild Bean Café units.

Wild Bean Café operate at some BP forecourts. They are: [view on a map -  Download KMLrefine search]

Wild Bean Café can be found at the following signposted service areas: