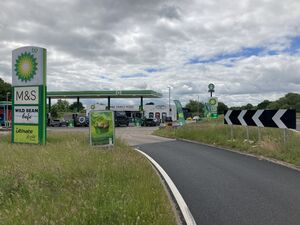 A pair of petrol stations immediately north of Longbridge Island.

Parking and use of the southbound forecourt is limited to 30 minutes maximum stay from entry to exit. These restrictions are strictly enforced by BP. 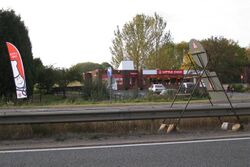 The former northbound Little Chef before it was demolished.

This service area was built in around 1981, as a pair of Little Chefs and Mobil petrol stations. The planning authorities were keen on Budbrooke being presented as an option for traffic on the M40, which had a long debate about possible service area locations.

At one stage in the late 1980s they even considered building a flyover at Budbrooke to make access easier for M40 traffic. Eventually the authorities relented and allowed the M40 to be provided with its own service areas instead.

The Little Chefs were known as the Warwick North and Warwick South branches. They gained Burger Kings in around 1996. The restaurants were closed as part of the sale by People Restaurant Group in 2007.

The southbound restaurant later reopened as the Autogrill Cafe for a few years, before becoming The Breakfast Junction. This closed in 2018 with the building remaining abandoned.

The petrol stations were refurbished between 2008 and 2009, and the southbound filling station was further refurbished in 2017, where it gained an M&S Simply Food store.