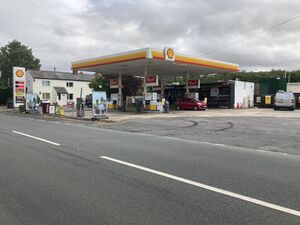 A429 Fosse Way at Stretton-on-Fosse

Rowborough Garage offers a petrol station by the side of the A429. Official services signs are provided on the main road.

The filling station here was built between 1955 and 1974, probably towards the end of that era, and was known locally as Rowborough Garage, named after the adjacent Rowborough (Roughborough) Farm. The garage was joined by the Stretton-on-Fosse branch of Little Chef in 1976.

The garage gained a canopy in 1980, and in 1982 was redeveloped by Mobil to gain a sales kiosk. The site was later rebranded to BP in 1997, and later became Shell.

The Little Chef restaurant closed in about 2006 and became Cotswold Spice. This closed and became Café Bangla, then Pitstop Café, and more recently Cotswold Cars before becoming vacant again in 2020.

The land was put up for sale in July 2019, as the landowner was retiring. The forecourt was broken into on 15 July 2019. A vehicle was used to ram the sales shop and did significant damage, and the place was left closed. It reopened in summer 2020 and was finally sold to AKV Garages in January 2021, who reopened the forecourt and extended the sales building introducing a Costa Express machine. They later also added Nisa Local branding.

A tired road sign on the A429 has several covered-up sections, as the facilities have changed over time. It continues to advise that accommodation is available.