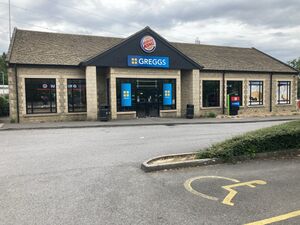 The only major facility on the fast road between Swindon and Gloucester, known locally as Hare Bushes service station.

Short stay customer parking is available for all vehicles, including 5 large vehicle bays at the back of the filling station.

No overnight HGV parking is available. 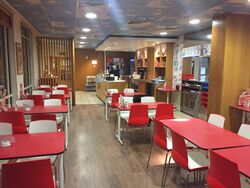 Plans for a service area here were drawn up as part of plans for the new A417 Cirencester bypass in the early 1990s due to Highways Agency raising concerns of how few services the new road had. This led to Forte and Total being granted planning permission in 1995 for a Forte Travelodge hotel, Little Chef restaurant and Total filling station to be built on this site, named Harebushes service station.

By the new millennium Little Chef had passed to a third owner, Compass, who continued to pursue the plans for a restaurant here. The site eventually opened in 2002 with the new Cirencester branch of Little Chef as a Little Chef Choices site with Caffè Ritazza and Harry Ramsden's menus and a Burger King unit alongside a Somerfield forecourt and Travelodge hotel. All the buildings on site were built with Cotswold stone brickwork. There were plans for a sister site at M5 J11A but that one was never built.

The Burger King was later closed and advertised for let. In 2013, this was reopened, and the site received a thorough refurbishment although not quite to the standard of Wonderfully British.

Following The Co-operative Group's acquisition of Somerfield in the late 2000s, the filling station was rebranded to Texaco in 2010 with the shop becoming a Co-op Food store.

During early 2017, the filling station was rebranded to Co-op Petrol.

The Little Chef restaurant and Burger King were passed to Euro Garages in February 2017, who only gained the rights to use the Little Chef name for a year so in January 2018 the restaurant changed to the temporary name EG Diner. This closed on 3 June 2018 with work expected to start to replace it with a Greggs, and to refurbish the Burger King however these refurbishment works commenced in late September 2018. Greggs opened in November 2018 with the Burger King opening in December 2018.