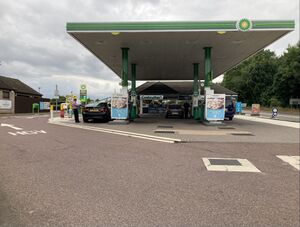 A417 between Gloucester and Cirencester

First 30 minutes free for cars, after which you must pay £1 per hour, capped at 12 hours maximum stay. No HGV parking is available.

Prices are paid using PayByPhone. The location code is 805943. 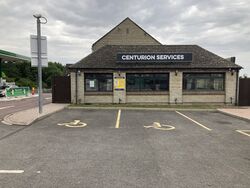 The petrol station first opened in around the 1950s, along with two dwellings called The Gables. One of these was extended in 1990 to become the Duntisbourne Abbotts branch of Little Chef. The forecourt was also branded Texaco at this time.

The Little Chef closed in around 2005 to become Olive's Family Restaurant, which itself closed in the late 2000s. The forecourt owners then acquired the building and attempted to keep the café trading, with the café becoming Highway Chef, A417 Chef, an American café and then back to the A417 Chef before being closed for good.

Following the closure of the Little Chef, part of the former car park was used to become a car sales area. This continued to be used for this purpose until 2020, with the site now left empty.

Plans emerged in 2008 to turn The Gables cottages and workshop garages here into a 15-bed hotel however these plans were refused.

The forecourt and restaurant were later acquired in 2014 by KSG, who rebranded the site to BP and added a Londis store. They later sold them onto Global Fuel UK Ltd in 2019 who, in summer 2020, submitted plans to transform the former restaurant building and workshop garages into a café and shop. These plans were granted permission in February 2021 however, in late 2020 Global Fuel sold the site onto SGN Retail so it is unknown whether these plans will become reality. Following the takeover, SGN Retail rebranded to shop from Londis to Best-One. SGN later rebranded the store to Costcutter in early 2021.