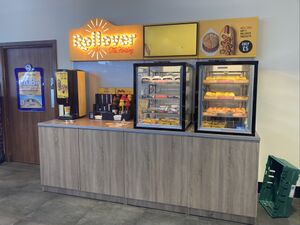 Rollover is a hot dog company which have small hot dog stands within many petrol stations. It was created in 2005 specifically for Roadchef, and trialled at their Clacket Lane forecourt.

Rollover's partnership with Roadchef later ended, but they have since partnered with MFG and, more recently, Welcome Break.

The idea was that the ready-cooked hot dogs can be purchased in seconds, and are therefore likely to be considered by somebody queueing up to buy petrol. In this 'grab and go' era, the idea of a forecourt selling food isn't so unusual, so Rollover is often one of a number of food stands that are available.

Rollover can be found at the following motorway locations:

Rollover can be found at the following official A-road service areas:

Rollover has been removed from the following official service areas: