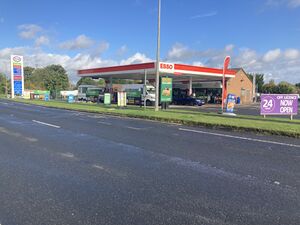 A1 between Newcastle and Morpeth

A small service station positioned on the old A1, meaning it's a short detour from the main route. 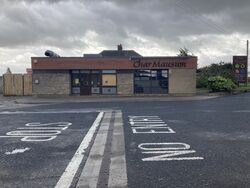 There is a pair of bus stops outside the service station which receive regular use. Despite the Little Chef having closed in 2004, NaPTAN (which is the source of most journey planning services and bus stop announcements) still calls both bus stops "Little Chef" (as of 2022).

The junction of the single carriageway A1 and Stannington Station Road had two petrol stations: a filling station on the northbound side next to The Bungalow, and a garage with fuel pumps on the southbound side called Klondyke. Both filling stations were independently owned and operated.

The southbound garage was owned by a tyre company called Safetyres which offered Esso fuel. The garage had a Little ChefHistory built next to it in the 1970s. It was one of the original Little Chefs, with a small, box-shaped building.

During the early 1980s, plans were being drawn up for the Stannington Bypass, which would see the A1 diverted onto a new alignment to the west of here, by-passing both garages. This sparked new plans for a service area in the area and in 1986 a plan arose that looked at combining the two sites into one, including a restaurant and filling station opposite the current southbound facilities adjacent to the new bypass. This proposal was unsuccessful.

The new A1 dual carriageway opened in 1987. Although the existing facilities received signage from the southbound side of the new bypass, they both received an instant significant drop in trade.

By the early 1990s, the southbound Safetyres garage had closed, with the building being converted into a forecourt sales building with customer toilets. The site also gained a car wash. Despite the bypass, the Little Chef managed to survive until 2004, when it was finally closed due to low sales. It's now the Indian restaurant Char Mausum.

The northbound filling station gained 'The A1 Diner' café at some point but the site was derelict by 2008 and was later demolished.

By 2008, the southbound filling station had been rebranded to Jet. This was later sold to Penny Petroleum in early 2020 who redeveloped the forecourt in autumn 2020 introducing a Londis branded store as well as new car and HGV pumps alongside an AdBlue4You bunker. They later rebranded the site to Esso in summer 2021.

There have been several plans to add additional facilities here to bring trade back to the site, including plans for a 35-bed hotel in 1989 and a 40-bed hotel and diner in 2004, but neither of these were built.