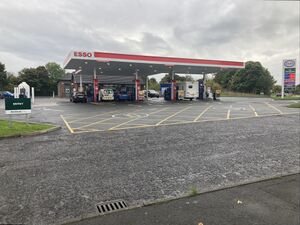 A1 at Thunderbourn Interchange, Alnwick
(also accessible to traffic on the A1068)

Willowtree and Cawledge form a pair if facilities on either side of the A1 at Alnwick. Thanks to the underpass at Thunderbourne drivers can take their pick as to which one they'd like to visit, but signposts will try to send northbound drivers to this one, Willowtree.

Short stay customer parking is limited to 20 minutes maximum stay for cars. A coach parking bay is also available around the back of the sales building. 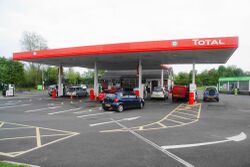 The forecourt with Total branding, pictured in 2013.

The Willowtree garage is named after the Willowtree Cottages, which it was built next to on a piece of land primed for development when the Alnwick Bypass was built. The forecourt was originally owned by Aln Motor Co Ltd, and then Ord's Of Amble, who had it branded BP. In the late 1970s there was a plan to build a hotel here.

The site rebranded to Total in 2012 before being removed a short time later in 2016, retaining the Total colour scheme. Co-operative Group then converted the site to their own-brand Co-op Petrol in 2017.

Rontec, who already owned the neighbouring site at Cawledge, purchased the Willowtree forecourt from the Co-operative Group in November 2019. They rebranded the site to Esso and added a Morrisons Daily store.