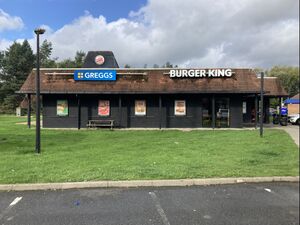 A former Little Chef site at the end on the A19, where it meets the A1. 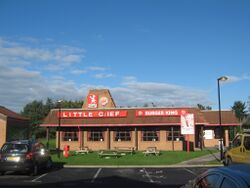 The service area as a Little Chef, pictured in 2010.

This service area was built by Kelly's Kitchen and Petrofina, opening in early 1989. By 1990 Kelly's Kitchen had been taken over by Little ChefHistory, and the restaurant was re-branded. The Little Chef gained a Burger King and continued to trade for almost 30 years.

Another Little Chef had been planned two miles east of here at Cramlington, but it was dropped after they acquired Seaton Burn.

The Travelodge was added in 1998. The forecourt became known as Fishers Lane Garage, and became branded Total. Total sold it to Rontec in around 2012, who branded it Esso.

In January 2018 Little Chef's new owners lost the rights to the name, so the restaurant transferred to the holding brand EG Diner. The temporary arrangement didn't last long and EG Diner closed in July 2018. The Burger King then closed on 19 October 2018 and reopened in January 2019 alongside a new Greggs unit, which replaced the old EG Diner.