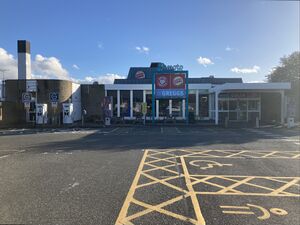 Signposted from the road? Yes (as Greggs/Costa/Burger King)

Sharing its name with a world-famous capital city, Washington has an old building squished into a deeply urban area. The southbound site is actually located off the J64 exit sliproad, and traffic leaving the services has to cross this to rejoin the motorway.

First 2 hours free for all vehicles, after which cars must pay £15 and HGVs, caravans and motorhomes £25. HGVs can pay £28 to include a £10 food voucher.

Prices are paid using PayByPhone. The location code is 2474 (northbound) and 2475 (southbound). 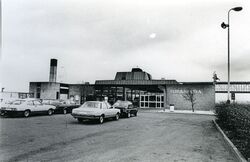 Until 2015 Moto were still manually updating the signs on the motorway with the current price of fuel, using patches. All other service areas in Britain stopped doing this at least 10 years earlier, but on several occasions Washington had been trying to compete with local garages.

Northern Powergrid is planning to increase the electricity capacity at Washington, to allow it to potentially become a charging hub in the future.