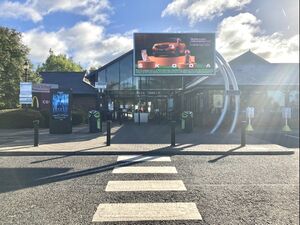 Durham is one of Roadchef's smaller services, located on what was a quiet corner of the motorway network, but is now becoming a busy development zone.

Roadchef also operates a Costa Drive Thru further down the A688 at Integra61 business park.

Prices are paid using NexusPay or in the shop. The location code is 2037. 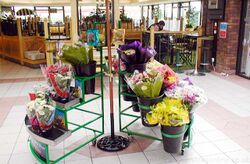 The service area opened on 23 August 1994. It was one of the first service areas to be developed privately, and had been put forward by Fina, who sold most of the land to Roadchef. Fina continued to run the petrol station - their first on a motorway - until they became Total. It then later changed to Shell.

Although the service area was built like most Roadchefs at the time, it was designed on a smaller scale as it was only intended to be a cheap development that filled a gap in provision on the A1(M). That gap was first highlighted in the 1960s, and various online services were proposed then and since.

It was the first service area to get a Wimpy, which was Roadchef's first High Street brand. This was placed at the far back of the small central area which the service area is built around.

Roadchef's first McDonald's Drive Thru, attached to the main building, opened in November 2019. Roadchef later opened a Costa Drive Thru in December 2020, located at Integra61, half a mile down the A688 at the next roundabout.

The Integra61 development meant that the right turn out of the main Durham services was banned, so traffic leaving the service area has to head down to the Integra61 roundabout anyway.

Northern Powergrid is planning to increase the electricity capacity at Durham. It will become a charging hub, with 12 Tesla Superchargers and 12 GRIDSERVE chargers, and a large solar canopy of the sort not seen on the motorways so far.