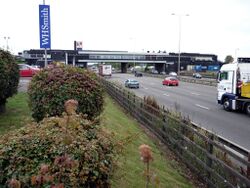 An early example of an online service area

An online service area is one which is built immediately adjacent to the road it serves, so drivers can literally pull in straight off the motorway. The standards prefer this design to offline services, but not everybody agrees.

Most of the UK's examples of this design have facilities on both sides of the road, but only because our services tend to handle large volumes of people. When the motorways were quieter, it was common to provide facilities on one side of the bridge only.

Since 2008 there has been a preference for this design of service area. Until the 1970s, it was the only design ever considered, unless there was absolutely no other option. As operators and developers were given increasingly more say in the design of new services, they would ask for this design to be built as it has lower running costs and attracts more traffic. 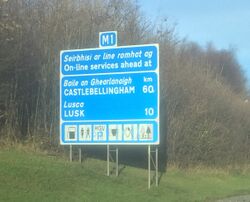 A sign in Ireland using the phrase "on-line services".

In Ireland, the phrase is used publicly, with signs providing information about "on-line" and "off-line" services.

Most customers will tell you they prefer online services because they are easier to find, and they mean you don't get caught up in traffic at the junction. This is true, but there are a few negatives.

Firstly, if you have a busy road which already has several exits, adding another exit for a service area can make things complicated and confusing. At Hilton Park, there isn't much space to tell drivers about the services because of the big exit for the M54 immediately before. At Chieveley, there is a long history of people getting confused and taking the wrong exit.

Secondly, introducing a new exit to a high-speed road introduces new safety risks. This can be avoided if you take advantage of a junction that already exists. The problem is this is only true if the junction has plenty of spare capacity, and in the UK most of our motorway junctions are already congested and accident-prone.

Drivers will often comment that the exits from service areas, when they lead straight to the main road, are usually far too short. This can be avoided if you're using a junction that is already built to a high standard, and it means the developer won't have to worry about the cost of building it. The 2020 update to the Design Manual for Roads and Bridges (DMRB) now states that exits for motorway services must be built to the same standard as any motorway junction, which will probably make them too expensive to build.

Local councils tend to prefer offline services as they are more efficient and, as a result, smaller. It's drivers and England's national highway authority who stick up for online services.

This section lists official motorway services only. You can also download it in in KML (for Google Earth and sat navs)