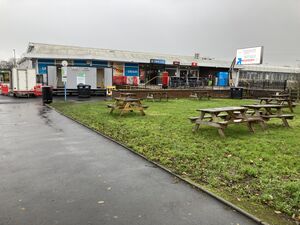 The only significant service area on the M2/A2 route, Medway has one old building built across the road. The place can be quite quiet as new routes such as the M20 and the Channel Tunnel Rail Link have meant that the M2 is no longer as important as it used to be.

First 2 hours free for all vehicles, after which cars must pay £15 and HGVs, caravans and motorhomes £33. HGVs can pay £36 to include a £10 food voucher.

Prices are paid using PayByPhone. The location code is 2454 (westbound) and 2453 (eastbound). 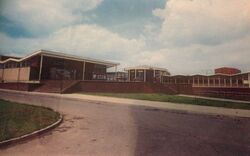 The services shortly after opening.

Medway opened as Farthing Corner services. It has a unique layout where the building straddles the motorway with an elegant stride, avoiding the clunky and unpopular two-storey arrangement that other service areas of this era had.

Medway has a works depot located on the westbound slip road back on to the motorway. The poor road markings mean that it is easy to go wrong here and, instead of rejoining the M2, end up passing through the secret exit (which in this case isn't gated) and end up in Rainham. This was first raised as an issue in 1964 and has persisted ever since.

A former garage building next to the hotel is now used by North Kent Counselling. This is certainly an unusual feature for a motorway service area.

On 3 December 2010 the building at Medway suffered a broken window due to storm damage. This caused the M2 below to be closed, with traffic being diverted through the service area.

The restaurant and sun terrace became a Burger King unit, positioned directly above the road.

The Costa outlet was moved in January 2015, making way for the M&S Simply Food store.

UK Power Networks are upgrading the electricity connection at Medway, to allow 24 chargers to be provided on each side of the road.