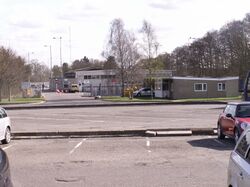 An example of a depot next to a service station.

Many older motorway services have a highway authority maintenance depot within them, usually signposted as a works unit. This page takes a brief look at why this is.

When the earliest motorways were being designed, it was decided that maintenance facilities should be provided every 12 miles. This figure was based on the capacity of a salt spreading vehicle at the time.

Meanwhile, in another meeting, it was decided that service stations should also be 12 miles apart. As a result, to reduce the number of exits on the motorway network and reduce the time taken to get maintenance depots through the planning process, it was decided depots would be shoehorned into existing service stations. There would be one at most sites, covering both sides of the road. Ideally, they would use land which had been severed by the construction of the new roads, but hadn't been incorporated into the service area.

As motorway services are commercial facilities, sometimes their site would be reserved until they were needed. The depot would still be needed immediately. As a result, the depot would occupy the whole site until the main service area was built, if it was ever needed. This was deemed to be better than digging up the land and then leaving it fallow. 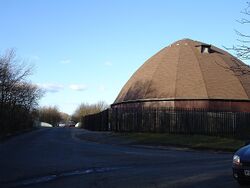 Salt domes are difficult to disguise.

Service stations started to put more emphasis on giving motorists as relaxing a break as possible, often by taking advantage of their natural landscape. The Ministry quickly learned that there was nothing less relaxing and less scenic than the sight of a salt storage barn, along with all the motorway maintenance vehicles. This wasn't just disappointing for motorists, but frustrating for the operators who were being encouraged to invest in building a pleasant service station.

The second complaint from operators was that they were expected to plan their sites to get people safely from the motorway to the car park, but instead they were having to include and maintain wide, sweeping slip roads to get heavy lorries in and out of the depot. When Toddington was originally opened to bids, it's thought that the operators were so fed up of having to incorporate a depot into their design, they simply ignored it.

Finally, the biggest mistake made when designing the original service areas was that they were made far too small, partly to save on land costs. Depots were taking away almost a quarter of what little land was available.

For these reasons, as soon as 1962, the Ministry stated that their latest policy was to "keep compounds as far as possible out of service areas". This didn't affect many projects that were already in planning, but the situation would soon be that maintenance compounds would remain closely tied to the motorway's construction, whereas service areas would soon be pursued separately.

There is one maintenance compound which is often mistaken by enthusiasts for an unbuilt service station, but it isn't. Perry Barr compound beneath the M6 was intended to be a city council maintenance depot, but it was realised that adding a (very tight) connection to the M6 would make it easier for motorway maintenance vehicles to access the nearby Spaghetti Junction. It was never intended to be a service station, or a junction.

A second example isn't well-known at all, but is still worth mentioning. With no land purchased at Redbourn, in 1959 a site was urgently needed to build a maintenance compound for the new M1. The site chosen was M1 J8 at Breakspears. A few years later it was considered as a possible site for a service area, but quickly ruled out because of the junction design.

At the time, Ministers expected all maintenance compounds to be part of a service area, so even they were confused by this anomaly, and some of their documentation wrongly suggests land here had been purchased to be turned into a service area. In 1961, an unrelated firm proposed building a motel here, which had its application refused.