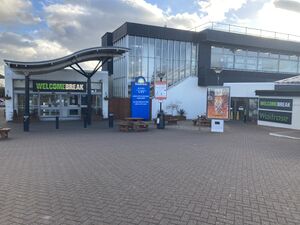 An old and crowded service area with all the restaurants on the bridge, packed in between two junctions. Its age is hidden by the many face-lifts it has received. It forms a gateway to The National Forest. 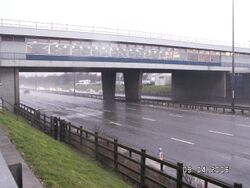 A view of the iconic bridge.

During the 2020 COVID-19 pandemic, additional restrictions were placed on activity in Leicester. The official boundary for this was the M1. This meant that half of the service station building was in the boundary, and half of it wasn't. In practice motorway service areas were exempt from most COVID-19 restrictions, but some of the finer details did matter.

The service area received media attention in 2009 after the adjacent hotel was used as overflow accommodation by Leicester University. On Christmas Eve in 1997, Arthur Smith broadcast his evening Radio 4 show live from the service area.

There is a National Highways works depot by the northbound exit, as with many old service areas.

Tesla Superchargers are due to be installed here soon. As a result of power limitations, the upgraded GRIDSERVE chargers were decommissioned in late 2022.

During the early days of the service area, you would have been able to walk along the promenade and terrace alongside the bridge, but these have both been closed. It would be difficult to maintain the area to an acceptable safety standard, with no commercial return.

The service area was built just as the concept of building above the motorway was falling out of favour with the government. They weren't too pleased with the plans, but Ross were welcomed to the network in the hope the new name would bring some variety to the motorway.

Ross took their role very seriously, creating a unique cruise-themed restaurant that called itself "a real place to celebrate".

The service area is positioned in a relatively dangerous position, with busy junctions either side. The M1 is already four lanes with no hard shoulder through the service area with no space to widen it any more, and no space to the south to improve the congested M1 J21.

Widening the M1 and expanding M1 J21 have both been considered several times over the last 20 years, with the suggestion being that Leicester Forest East would be forced to close, or at least move away from the motorway. The work was due to begin in 2010, but was then put back to 2017 before being postponed indefinitely.

In September 2017, it was reported that the service area was a barrier preventing any plans to upgrade the M1, and that the option of moving it to another site had been considered. Separate to that, the draft vision for Whetstone Pastures suggests a new motorway service area could be built a few miles south of here. It's not impossible that one day the two concepts will combine.