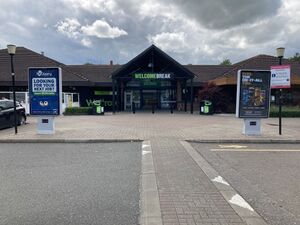 This is the Welcome Break service area on the M40. For the smaller services on the A46, see Budbrooke.

Once quite an open and spacious site, it has now been extended considerably to provide a wider range of facilities.

The two sides of Warwick have always been treated as separate on Welcome Break's website. This appears to come down to the way their first website described the road layout at J13 (which has no signs when travelling south), and they have copied it ever since. The sites are able to operate fully independently, and were officially split in 2021, when each side received their own site manager.

The northbound Days Inn hotel was closed for a few months in 2007 after the ground floor flooded.

The southbound service area gained a new Starbucks Drive Thru on 20 December 2013.

In 2000 a swan made of quartz chips was put in place in at the entrance to the southbound services, with a flowerbed reading 'Welcome to Warwick'. The swan was based on (but different to that of) the old Welcome Break logo. It was removed after a few years.

Upper Crust units opened here in the filling station shops on both sides in June 2018, one of three sites to gain this new brand at the time. These were later rebranded to The Pasty Shop in 2022.

The southbound Tossed store closed here in February 2020 as part of a nationwide shutdown of their motorway sites. A Chopstix Noodle Bar replaced the Tossed unit later in 2020.

The service area made the news in May 2020, after a volunteer started offering free food to HGV drivers in the northbound parking area, while the main food franchises were closed due to the COVID-19 lockdown. The volunteer was eventually asked to leave by Welcome Break, who claimed that there had been complaints about the safety risk. 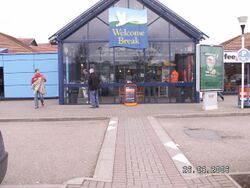 Documents as far back as 1974 talk about possible places "near Fosse Way" where a motorway service area could be provided on the then-unbuilt M40. The location wasn't confirmed until 1986 as other location near Gaydon were being examined too. The main factor appeared to be the distance from the planned Black Firs services on the M42.

As was common in the late 1980s, once the Department of Transport had made their intentions public, it attracted commercial rivals. Mobil registered a planning application in the exact same location, showing a similar layout but with a footbridge (the DoT had ruled out building a footbridge). Meanwhile Blue Boar planned a site at M40 J12.

Those rivals were rejected, but once the Department of Transport had secured planning permission they decided to award the contract to build it to Mobil, under their new single tender policy.

Both Mobil and the DoT had called the planned site Barn Hill services. Mobil decided to partner with Welcome Break, who opened it 'Warwick services'.

For a fairly new service station the exit slip roads are surprisingly short.