Unbuilt Services On The M42

For a list of current service areas on the M42, see Services on the M42.

As was the case with the M25, when so many major routes converge, it can be difficult to know where to place the service stations. The M42 has become notorious for its contribution to the large gap between Warwick services on the M40 and other services on the M6, M6 Toll and M54.

Other issues with the M25 apply here too. As the M42 skirts the affluent edges of what is commonly called Birmingham, it runs through green belt land, and has closely spaced junctions which involve underpowered roundabouts that can't take any additional traffic. Finding somewhere to build a service station here was always going to be difficult - which is why it has taken more than 50 years. 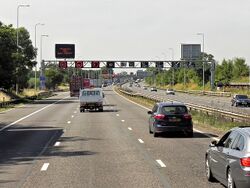 The site of the service area at Friday Lane.

The first plan for service areas on the M42 was confirmed in 1969, and involved building two sites:

A note was added that "careful design" would be required, as residents (and the local authorities who represent them) were expected to be hostile to the idea. This would become a common theme.

The Friday Lane site was reported in the press in 1971 and 1973, where it was described as being about 60 acres in size. It is unusual for a street name to be used as an official title, but not unheard of. The press called it Hampton-in-Arden services while many sources have called it Catherine-de-Barnes services. They like their hyphens around there.

Details of the planned site at Friday Lane were shared with developers in 1973. Work on the M42 started the following year with no evidence of it.

Warwickshire County Council were among those who objected to it. It was reported that other options were being looked at by 1974, though Friday Lane remained the plan until 1978. It would later explained that Friday Lane became the preferred option through elimination, rather than selection.

The site called Newton Regis would be referred to in most other documentation by the idealistic-sounding name Austrey Meadows. It was described as "pleasant rural surroundings, shallow valley". Another option at Bramcote Wood had been examined.

Detail on this one is much harder to come by, as at this stage the route of the M42 wasn't formally confirmed - work wouldn't start on this part of the M42 until 1984.

With Friday Lane thrown out, a new pairing was introduced:

Black Firs attracted attention in 1974 and was scheduled to open in 1978. A major flaw was soon discovered: North Way was in the way of the planned site of the service area. In theory it could easily be moved because it was running through countryside at the time, but it was going to be built as part of the M42 contract which was ready to go. So Black Firs was postponed.

The Department were also unhappy that Black Firs would have been so close to Corley. They also realised it would attract criticism because of how quickly the land around here was being developed, with everything associated with the motorway, the NEC, the airport and now a service area all focused on the same area. They said it might be better as a park and ride site, rather than a service area.

While they were looking for a new site, they considered building by the roundabouts at J6 and J10, but it was thought that those junctions would be too busy.

Willersley Woodside appears to have been chosen to maintain a good spacing from the new site at Black Firs. It is again named after a street. Austrey Meadows still wasn't totally ruled out, and there were still questions over the route of the road. 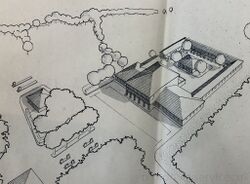 A drawing of a possible building for Dunton services.

Documentation from the local authorities tells us about a third pairing which came to prominence in the late 1970s. It's possible that these two were intended to work with one of the other pairings, creating an even spacing. However, they were described like an exclusive pair, so it sounds like they were designed to be less controversial alternatives to any of the suggestions made so far.

Both of these options were quickly ruled out. Little has been written about Portway, but we know that Curdworth would have been built on the eastern side of Dunton Interchange, with the entrance on the A446 and the exit leading to either the A4097 or the A446.

Studies found that Curdworth services would have a major impact on Dunton Hall, and lead to excessive queues on the roundabout, which was under construction at the time and couldn't be modified.

The difficulty of finding a suitable site on the M42 - and the difficulty of stimulating much interest from service area developers which had been experienced across the country - led to the Department of Transport trialling a new idea.

Rather than purchasing a particular site and inviting developers to bid to run it, instead the Department of Transport invited developers to find a site where they would like to build a service area.

This process resulted in "considerable interest" in Curdworth: Belgrave Holdings wanted to build on the west side of the roundabout, but were met with strong complaints from residents, who said they were "disturbed" and concerned about the effect on young children. More importantly, a new motorway, the Birmingham Northern Relief Road (now the M6 Toll) was already planned to be built here, which the residents said would "run across the proposed lorry park on stilts".

Granada said that they had also looked at Curdworth, but their consultant had advised them to work on Green Lane Interchange instead. They said they had a 15 acre site, with 5 more acres available. Heron then came forward with another option for the other side of the same roundabout. As Granada's side was closer to the existing development, it would win and open as Tamworth services.

This would be the only service area to be built on the M42 before the industry was deregulated. There is evidence that the issue wasn't totally forgotten about. The location of Warwick services on the M40 was chosen in 1986 because of its distance from the planned service area on the M42. It is 25 miles from the Black Firs site, for example, which would fit.

In 1992 the Department of Transport said they had completed "preliminary work" at a site they vaguely titled "M42 South", but no further detail was provided. This may have been a reference to Portway.

When the M40 was completed in 1991, the gap in service areas in the Solihull area became a major problem. It formed part of the long route between Folkestone and Telford which, for a short while, could be driven entirely by motorway without passing any service areas. Between 1993 and today, there has been an ongoing proposal to bring the original Friday Lane site into use. 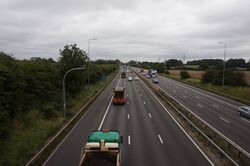 The site of the planned Walton Hall Farm exit.

Some of the new motorway services once planned for the M42 we have uncovered include: