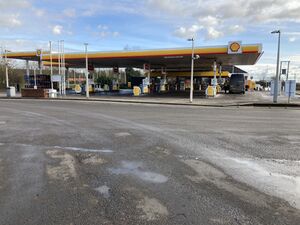 The service area consists of a filling station and McDonald's at the end of the M42, primarily serving the A444.

The planned HS2 eastern rail link will pass very close to this service station. It's likely that the entry junction will have to be modified to make space for it.

The newly-built McDonald's restaurant, pictured in 1993.

A study into service areas on the M42 at Polesworth examined eight possible sites, including one on the western side of the Appleby Magna Roundabout. This was quickly declared to be impractical for a major service area.

The new motorway meant Tamworth Road had to be moved onto a new alignment. This left an abandoned section of road next to Appleby Field.

There was a proposal to turn this land into a smaller-scale roadside service area, first endorsed by Fina and Kelly's Kitchen. While they didn't have planning permission, Kelly's Kitchen did advertise it as opening in Autumn 1990.

In the event, Kelly's Kitchen were sold and Forte chose not to continue with this site. Instead McDonald's took the opportunity on, and built their second ever UK roadside restaurant here in June 1993. They called the branch "a test" of their success at a service area. The Fina was built and became Total, and then was sold to Shell in 2013.

Since it opened, there has been a debate between the landowners and various civil servants about whether the services could, or should, be signposted from the motorway. The argument has surfaced repeatedly since the 1990s. In December 2017 non-standard signs were added to the M42, but these may be changed.

If official signs are provided, Appleby Magna would become an MSA, even though it doesn't provide the required facilities. However, improved signage would benefit the landowner, and it would also be an opportunity to reduce the number of fatigue-related accidents on the A42.

Strictly speaking the current signs on the M42 refer to this as a "non-motorway service area", even though it is signed from a motorway because that's what those signs are doing!