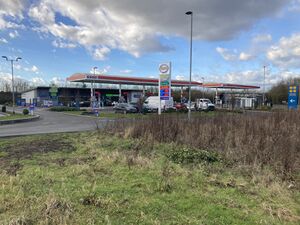 The Flagstaff Island Roundabout above the A42 near Ashby used to have a few facilities, but recently it has been expanded and had signs added to the A42 southbound, despite being accessible to both sides.

When the A42 was built in the 1990s, the Ashby exit became ideal for developing into a retail area. The area on this corner of the roundabout was designated for use by 'roadside services' in the local plan.

For years the site consisted of only the Brewers Fayre/Premier Inn combination, and a McDonald's. They were developed by Whitbread and St Modwen. It was clear from the layout that the field next to it was waiting to be sold, and in 2006 St Modwen applied to expand the facility but didn't appear to take any action.

The first signs promoting the site came in 2010 when a sign was placed on the A42 southbound advertising 'local services', probably at the request of a landowner, or in response to fatigue-related accidents on the A42.

Plans to develop the field eventually came in 2012 from Euro Garages to build a smaller development closer to the hotel however this was later withdrawn. The present layout was proposed in 2016. Around the same time, the southbound 'local services' sign was replaced by a formal 'services' one.

On 3 May 2018 EG Group opened one of their largest facilities here, including the country's second ever 24-hour Greggs Drive Thru. On Friday 8 June, The Mayor of Ashby Roger Bayliss attended an official opening event here which also featured a Red Bull Formula 1 car situated on site over the opening weekend. Initially they called it Flagstaff services, but they have now reverted to referring to its location near Ashby-de-la-Zouch.

The shop was rebranded from SPAR to Asda On the Move‎‎ on 20 October 2020.