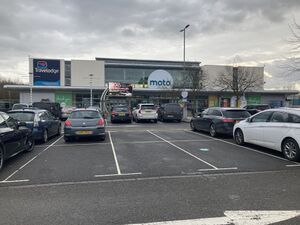 Is it an airport? Is it a town? It's one large service area that caters for many roads at once.

Many visitors are surprised to discover that, if you are arriving from the north or leaving to head north, this service area is more than two miles away from the motorway. It doesn't add much time to your journey, but it will leave you triple-checking you're going the right way as you navigate the ever-increasing number of traffic lights.

Prices are paid using PayByPhone. The location code is 2435. 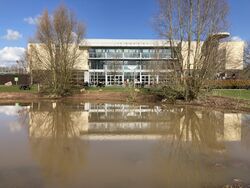 The lake at the back of the services.

Donington was originally named Donington Park, and it is still better known by that name - even by Moto. It is commonly misspelt "Donnington".

The service area was appointed as a gateway to The National Forest. At the back by the lake there are information boards and viewing platforms.

It's one of the only service stations where a hotel is thoroughly built-in to the main building. Other service areas, like Stafford, had the hotel joined on to the main building, but Donington has the hotel built on top of it, which saved space and made the planning process easier. While it's an interesting design, it did make some of the hotel rooms nosier.

In July 2020, Donington joined the "fuel price drop", where Moto pledged to compete with local petrol stations. In October 2020, Moto introduced attended service to the petrol station - the first time it had been available on the motorway for many years. Donington later opted out of the fuel price trial, perhaps because it didn't have the motorway signs to advertise it.

A Costa Drive Thru opened at the back of the car park in 2021, after Moto proposed a number of different positions for it.

An internal refurbishment was carried out in summer 2021, which saw the toilets and showers extended into the former Moto Meetings space and the Costa unit moving to the former Harvester unit, making way for a new KFC unit that opened in September 2021. A Pret A Manger opened in the former Ladbrokes unit in March 2022. With its newly refurbished facilities, the site became the second site to gain Moto's new corporate branding in January 2022.

Planning permission is also held for an additional 20 HGV parking spaces to be built within the existing HGV parking area by removing 2 storage tanks. These works are expected to be undertaken in 2022.