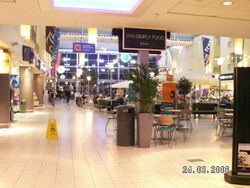 Donington opened during an era where service areas were working hard on their appearance, and that is probably a factor in why it was originally named "Donington Park". Even though the racecourse of the same name is close by, suffixes like '-Park' were very common at the time.

When the road signs were changed in 2016, the 'Park' suffix was officially removed. The purpose of the name change isn't entirely clear, and it may be something as mundane as wanting the sign to be cheaper to make. Moto themselves tend to still call it Donington Park, and as they run it, their word should be final - but the road signs disagree and the signs are supposed to be rooted in a legal agreement.

When the M1 was built, arrangements were made for a service area to be built slightly south of here, at Long Whatton. That was never taken forward, but in the 1990s commercial developers took an interest in the road.

The land at Donington was identified by Hallam Land Management, who developed the initial plans. It had to compete with two service areas proposed by Extra, to be built on the M1 further south of here.

The public inquiry described the access to the proposed Donington Park services as "complicated and confusing", however the competing plans were considered to have "serious disadvantages". In particular the fact that Donington Park could also serve the A42 was seen as a major selling point.

At the time, the Highways Agency was looking at replacing M1 J23A and J24 with one new interchange, which was seen as rendering the navigation argument redundant in the long term. In the short term, the roundabout at J24 was widened to handle the additional traffic that would be making the long drive along the A453.

In addition, the A453 between J23A and J24 was totally undeveloped at the time, so the inquiry considered that it was an easy drive with no obstructions between the two junctions. Even so, the lay-bys along that road quickly became popular with people who had given up trying to find the service area, and that was before the additional traffic lights were built.

Mobil were said to be interested in purchasing the site from Hallam, but after planning permission was awarded at a public inquiry, it was Granada who purchased it.

In 1989, before the A42 or Finger Farm Roundabout had been built, East Midlands Airport planned a much smaller service area here. It would have had a petrol station close to the new roundabout, HGV parking in the middle, and a small restaurant building behind this.

Planning permission was granted, and the fact this land was going to be developed was one of the arguments used in favour of the Hallam Land site being granted permission. No progress was made with the airport site, but just before the planning permission was about to expire in 1995, the Airport carried out some minor work to the drainage here.

There are differing reports on why they couldn't continue. When they finally did get back to work on it in 2004 (after the main Donington Park services had already opened), North West Leicestershire District Council disputed the airport's version of events and argued that their planning permission had xpired.

An application to continue the development was refused in 2004, and again in 2009, with an appeal and public inquiry held in 2011. The parish councils and Moto objected to these applications, while the Highways Agency advised that the land was likely to be needed for a planned road upgrade. Permission was granted but not used. Curiously, that permission called it a "motorway service area", even though Circular 01/2008 wouldn't have allowed one MSA to be built opposite an existing one.

The land was sold and is now thought to be the planned site of new offices. 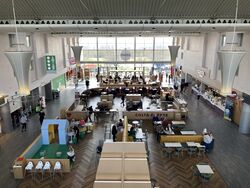 The view from the in-built Travelodge following the refurbishment in 2022.

The outline proposal showed a smaller building, with a visitor centre at the front, and a separate lodge.

The service area was the first to be built with a design that was compared to that of an airport terminal which, albeit slightly modified, is a concept still used by new service areas today. It was billed by Granada as "a village by the roadside", aiming to reflect the wide range of facilities which would appeal to commuters.

The design of the building was a natural evolution from Granada's work at Stafford, which stood out with its back garden, open dining area and a large back window. Donington was similar but had more windows and no corridors at all.

The architect was Broadway Malyan, while the interior was designed by BDG McColl. The aim was to have the shopping units arranged around a hub where people could relax, instead of being in a long corridor.

It's one of the only service stations where a hotel is thoroughly built-in to the main building. Other service areas, like Stafford, had the hotel joined on to the main building, but Donington has the hotel built on top of it, which saved space and made the planning process easier. It also helped create the impression that the building was a 'village'.

An opening ceremony was held in 1999, hosted by TV presenter Charlie Dimmock, who was chosen because of her association with tree planting.

A considerable investment was made in the forecourt, as it was considered to be a good place to catch commuters, something Granada were keen to do. As a result, it has its own parking area, and inside there was originally Sketchley dry cleaning, a photo development service, and a Fresh Express café, which explains why the shop still has such large windows.

The main building opened with shops including Knickerbox, Tandy Express, Thorntons (which lasted a lot longer than the rest), Tie Rack, The Sock Shop, Halfords and Early Learning Centre.

The service area was the first motorway site to gain a Marks and Spencer store. At its time it was the smallest M&S in the world, but it was then extended and rebranded to M&S Simply Food. It was built where the Burger King was, and the Burger King was moved further back. A WHSmith store also opened here, replacing Birthdays and the Moto Shop. 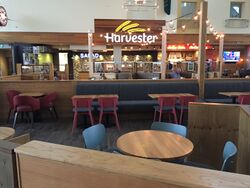 The short-lived Harvester, pictured in 2017.

On 21 May 2013, a franchised Harvester opened here on a trial basis. Moto had suggested it could become their main restaurant partner if it was successful. However no more branches were opened and Moto instead looked at other restaurant options for the rest of their sites.

As with all motorway restaurants, the Harvester temporarily closed in March 2020. It was then announced that it wouldn't be reopening. In Summer 2021 the Costa was removed and moved to this unit, making way for a new KFC, which opened in September 2020. The former seating area became a Costa lounge.

The Highways Agency had applied to build a regional control centre here in 2004, but it was refused.

Planning permission was granted for a Costa Drive Thru in June 2017. It would have been built at the back of the existing car park, with indoor and outdoor seating as well as a separate car park. A second set of plans were produced in December 2018, and also approved, which showed a drive thru kiosk only. A third proposal was approved in March 2019, which had the kiosk placed by the exit lane. The drive-thru eventually opened in 2021, being positioned at the back of the car park as a drive-thru kiosk only.

Since July 2020, Donington has been taking part in the "fuel price drop", where Moto have pledged to compete with local petrol stations. In October 2020, Moto introduced attended service to the petrol station - the first time it had been available on the motorway for many years. Donington later opted out of the fuel price trial.