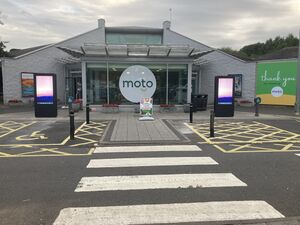 In the middle of the old and stressful stretch of the M6 is this surprisingly leafy service area, with its large lake walk for northbound travellers only.

Prices are paid using PayByPhone. The location code is 2463.

The service area opened in 1996, earlier than its southbound partner, which is the key to why they are so different.

This is possibly the only service area to double-up a dog walking field with an overflow car park, changing between the two as necessary.

The tall, light building overlooking the lake was designed deliberately.

The first planning application was made by the Agricultural & Food Research Council in 1993, and the proposal was known as Cold Norton. Mobil bought the site from them for £10m, and then worked with Granada as a joint investment. Granada soon purchased the land that the whole site is built on.

At the same time Granada put in an application to build a southbound service area directly opposite, but they were beaten to it.

Both the northbound service area and the planned southbound side were deliberately set back from the road by 67 metres to allow for the M6 to be fully widened, as had been announced in 1989. The first plans (dated 1993) didn't account for this and were rejected as a result. Space was also left for the B5026 to be re-aligned. When the widening eventually happened in 2019, it was done on a much smaller scale, so the widening strip remains empty.

When it opened, the service area trialled a new brand identity which was quickly adopted nationwide by Granada. As part of the changes, the service area was one of the first to use polished wood instead of dirty carpets; it had stands with local information; it boasted more spacious toilets and, for a brief period, staff were positioned to welcome customers and hand them ashtrays if necessary. The new ideology followed extensive research by Granada to establish what customers wanted; the design work was by Pentagram.

The official opening date was recorded as 1 April 1996, but Granada say it actually opened on 30 March. It's likely that a dry run was held.

One of the early drawings had a square amenity building in the centre of the complex, with the lake being within the motorway loops.

When it opened, there was a Retail Store on the immediate right. This became WHSmith, and was then moved back by taking away the public telephones. This plus an extension made space for M&S Simply Food.

On the left, an office became Birthdays and then Fone Bitz. It was then closed to create a new, open-plan Burger King seating area, which in turn created space for Greggs to be built at the front of the building.

At the back, by the corridor to the toilets, space was designated for a waitress-service restaurant. This opened as Rock Island Diner, then became Little Chef, before becoming an open-plan Caffè Ritazza, later Costa.

The coffee bar was originally supposed to be at the side, but opened at the centre.

The forecourt was operated by Mobil until their merger with Esso. The forecourt shop used to feature a Burger King with drive-thru lane alongside the shop, but this was later removed due to a lack of custom. A sign opposite the forecourt exit now advises customers that it is a 'short drive back to the main building' to use the main Burger King restaurant following the closure.

Moto later sold the forecourt to BP, who wasted no time in adding an M&S Simply Food and Wild Bean Café. In summer 2016, BP removed the M&S Simply Food offering, rebranding the store to one of their BP Connect sites.

During early 2018, the EDC restaurant was refurbished and reduced in size to make way for a Chow Asian Kitchen unit. As part of this refurbishment, EDC gained a refreshed look as well as a branding update. This unit then closed in autumn 2019 along with the remaining EDC units across the country.

A Millie's Cookies cabinet was here for a time next to the Krispy Kreme cabinet outside WHSmith, but this has since been removed.

The site underwent major refurbishment works during early 2022, with a new food court arranged at the back of the building. The new food court includes a refurbished Costa Coffee store, which opened in March 2022, along with a new Chozen Noodle unit replacing the former Chow unit and a new KFC restaurant, which both opened in early June 2022. A new Pret A Manger store then followed in late June 2022.

The toilets and showers were also upgraded, a new Changing Places facility was added, and Moto's updated branding was applied. It is expected to become an electric vehicle charging hub with 12 new Tesla Superchargers along with six new GRIDSERVE chargers.

bp pulse electric vehicle charging points were installed here in 2020, but weren't switched on until August 2022 due to power supply issues.