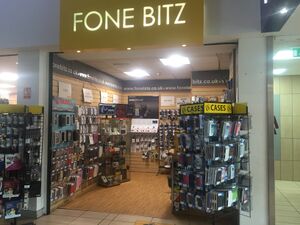 Fone Bitz sold an assortment of mobile products across the motorway network.

Initially they had branches in town centres and railway stations, but the company contracted and opted to focus on motorway service areas instead. This was followed by an expansion, with branches opening at a large number of service areas.

Their stores varied in size depending on how much space was available: some were basically just a few shelves in a spare corner, while others were large shops.

By focusing on mobile phones, Fone Bitz sold items that remained relevant to everybody passing. However, customers increasingly preferred to order what they needed online, and have it waiting when they got home. Another change was that many people became used to carrying accessories like charging cables around with them, and no longer needed to buy one in a hurry.

In 2020 Fone Bitz encountered financial difficulties, and closed the majority of their stores in March. The final six stores were expected to reopen following the COVID-19 lockdown, but by then the business had been liquidated. Those stores are now owned by Phone Tech, and many reopened under that name.