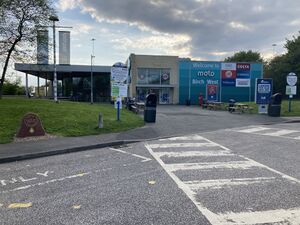 Two different services close to Manchester on the busy M62. The eastbound side is the older and smaller of the two, while westbound is a lot more airy.

Prices are paid using PayByPhone. The location code is 2427 (westbound) and 2426 (eastbound). 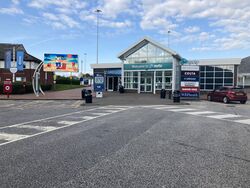 The parking prices used to have an unusual (and rather expensive) tier system, but it has now reverted back to the standard 2-or-24 hours system.

The original contract to operate the services states it is the westernmost on the M62. At the time it was written, the M62 was expected to end at Manchester, but the road was extended to Liverpool.

A Costa Drive Thru was planned to open on the westbound side too to join the eastbound one however the permission for this has now expired.

Moto currently hold planning permission to install an electric vehicle charging hub at the back of the westbound car park which is set to include 6 GRIDSERVE charging points and 10 Tesla Superchargers. They are also seeking to build two new Changing Places facilities, one on each side.

The services were built by Taverna and opened with a long roof, which stretched to the ground, much like Woolley Edge. The bridge wasn't directly connected to either building.

When Granada took the place over, they painted it brightly in red and white. Inside, the tall roof had a beamed ceiling with differing levels and tables with high skylights throwing light inside. The large café had an area for lorries designated within it. The TV and pin ball machines created a lot of background noise. They trialled a holiday-booking service here, but were quickly told to remove it.

In September 1975 there was a clash between Leeds United and Chelsea fans who stopped on either side of the road and met on the bridge. This resulted in smashed windows, uprooted trees and a total of £3,000 worth of damage. Hooliganism like this was a common threat at service stations in the 1970s.

A 1978 government review described the services as "pleasant, well managed, but not wildly exciting".

The service area was unfortunately the scene of a brutal murder on the morning of 14 September 1989. Inspector Raymond Codling was a police officer investigating a suspicious vehicle when he was attacked. A memorial to him is placed beside the hotel, and memorial events are held here.

In 1990 it was expected that plans to build a new motorway alongside the M62 would see Birch services be demolished. The Department for Transport suggested they would be allowing Granada to build a new service area five miles to the east. This motorway was never built but it was considered again in 2016.

The westbound amenity building was destroyed in a large fire on the 9 October 2003. After losing large sums of cash in a slot machine, Jason New started kicking it. He then went to the shop and bought a lighter, promptly setting fire to the machine. By 1am, the whole westbound side of the services were alight and evacuated. It took 70 fire-fighters four hours to bring the blaze under control.

Whilst the site was being rebuilt, temporary facilities were provided. The petrol station, hotel and eastbound services were not affected but were initially evacuated.

The new building opened in December 2004 and caters for 242 cars, 120 lorries and 30 coaches. Upon opening, Moto described the new building as being "the most modern on the motorway network". The bridge over to the other side is not connected to the new building; you have to walk outside to reach it.

Granada extended the front of the eastbound services by adding a series of shops for customers to pass on the way in. This hides the original low-hanging roof, which was designed to look good in a snowdrift. A second entrance, leading straight to the toilets, has been closed.

In November 2011, the front of the services was damaged in another serious fire.

In 2013, an Ernie's Fish and Chips takeaway was trialled here alongside a second unit at Moto's neighbouring service area Ferrybridge. However, these were both removed in 2015 following an unsuccessful trial.