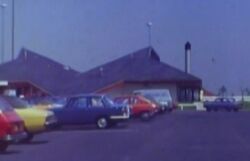 When the M62 was extended from Eccles to Yorkshire, a detailed study was carried out to find the best locations for new service areas. This concluded that the road was too industrial and had too many junctions, and there was only one possible location: Birch.

The Highway Services division worked out it would cost £750,000 to prepare the land at Birch, partly due to the gulleys and streams that would need diverting, and felt this was excessive. £13,500 would be spent on the base of a footbridge. They were told it would have to be Birch, or the western half of the M62 would have no service areas at all. Between 25 and 33 acres of land were selected.

The location was approved in 1967 and a contract was awarded to Granada in September 1968. Their layout would have been similar to what they wanted at Corley and Kempshott, included large parking areas, which had all been signed off. Then Granada became locked in battles with the Ministry of Transport, and they withdrew from the process at Birch in January 1970.

As a result, it was decided to award the contract to the next-best entrant, which was Esso. Esso had since developed their own service area brand, Taverna, who agreed to build Birch services in June 1970.

The contract stated that Birch would be the westernmost service area on the M62. At the time it was written, the M62 was going to start/end at Manchester (specifically Stretford, where the search for service area locations had begun).

Taverna gave each of the two buildings at Birch a long roof, which stretched to the ground, much like Woolley Edge. Inside, the tall roof had a beamed ceiling with differing levels and high skylights throwing light inside. The architect of these unusual buildings was Challen, Floyd, Slaski and Todd. Esso called it "the best of its kind to date".

The large café had an area for lorries designated within it. The glass footbridge wasn't directly connected to either building, though this would change when the buildings were extended.

The service area opened on 18 December 1972. Westbound customers had to use the footbridge as this restaurant wasn't ready until 1 January 1973. 200 jobs were created.

Unlike Granada, Taverna had decided to break up the parking areas with a series of grass islands. This meant that Granada's plan to floodlight the site with high mast lighting was now excessive, but the Department of the Environment didn't spot the opportunity to swap for cheaper, smaller lighting columns until the tall ones had already been built. As a result, Birch is still one of the only motorway service areas (and one of the only places on the English motorway network) to have floodlighting, and this was a cause for frustration and embarrassment within the Department.

Granada soon took over Taverna, giving them control of the service area anyway. They painted it brightly in red and white, and inside the café was painted orange, with fixed yellow tables. Customers commented that the TV and pin ball machines created a lot of background noise. They trialled a holiday-booking service here, but were quickly told to remove it.

In September 1975 there was a clash between Leeds United and Chelsea fans who stopped on either side of the road and met on the bridge. This resulted in 40 smashed windows, uprooted trees and a total of £3,000 worth of damage. 26 people were charged. Hooliganism like this was a common threat at service stations in the 1970s.

A 1978 government review described the services as "pleasant, well managed, but not wildly exciting".

The service area was unfortunately the scene of a brutal murder on the morning of 14 September 1989. Inspector Raymond Codling was a police officer investigating a suspicious vehicle when he was attacked. A memorial to him is placed beside the hotel, and memorial events are held here.

In 1990 it was expected that plans to build a new motorway alongside the M62 would see Birch services be demolished. The Department for Transport suggested they would be allowing Granada to build a new service area five miles to the east. This motorway was never built but the idea was considered again in 2016.

Granada were given permission to change Birch's name to "Manchester North" in June 1996. It's not believed that the new name was used on road signs, although it was used in a lot of their publicity. The proposal was withdrawn due to the cost and poor reaction. 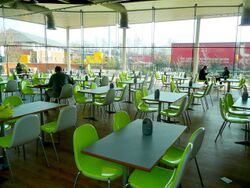 The new westbound building was provided with a distinctive café (pictured in 2009).

The westbound amenity building was destroyed in a large fire on the 9 October 2003. After losing large sums of cash in a slot machine, Jason New started kicking it. He then went to the shop and bought a lighter, promptly setting fire to the machine. By 1am, the whole westbound side of the service area was alight and evacuated. It took 70 fire-fighters four hours to bring the blaze under control.

Whilst the site was being rebuilt, temporary facilities were provided. The petrol station, hotel and eastbound services were not affected but were initially evacuated.

The new building opened in December 2004 and caters for 242 cars, 120 lorries and 30 coaches. Upon opening, Moto described the new building as being "the most modern on the motorway network". The bridge over to the other side is not connected to the new building; you have to walk outside to reach it.

Granada extended the front of the eastbound services by adding a series of shops for customers to pass on the way in. This hides the original low-hanging roof, which was designed to look good in a snowdrift. A second entrance, leading straight to the toilets, has been closed.

In November 2011, the front of the services was damaged in another serious fire.

In 2013, an Ernie's Fish and Chips takeaway was trialled here alongside a second unit at Moto's neighbouring service area Ferrybridge. However, these were both removed in 2015 following an unsuccessful trial.