4 photos in the gallery 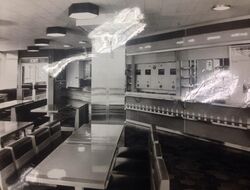 By the 1950s and 1960s, it was clear that petrol filling stations were going to be key to a new era of travel. As a result, the oil companies were keen to push their brand.

Esso eventually decided they wanted their own chain of service stations - for which they used the name Taverna. Although the regulations at the time didn't like service stations selling only one brand of fuel, in most cases Taverna managed to arrange it so that only Esso fuel would be available. The idea was 'Taverna' would be the name people associated with dining and resting, while 'Esso' would only be associated with fuel and garages.

The Taverna name was also used alongside Esso service stations in Sweden and Norway. It was just one of Esso's experiments during this period: they also launched Esso Motor Hotels, which was introduced to Britain in 1966 and removed in 1972. The hotels were managed totally separately from the service stations, and regulations forbid any hotels at service areas. If the two brands were around today, they would likely have been partnered up.

Luck Gave Them A Service Area

After Esso lost their small Port service area on the A1 to roadworks, they were offered the chance to build Washington MSA instead. This unusual process was an effort to address the lack of interest received when prospective operators had been invited to bid for the site.

Esso had a knack at building services: their designs were both brave and fresh. But they had no experience in running them. Compared to a normal filling station, a service area had the additional pressure of high catering expectations, which they simply weren't cut out for.

Initially, their disinterest led to ingenuity. For Washington, they developed a complicated and pioneering catering system which used automated vending machines and microwaves, which were new to the motorway and allowed it to boast that it was "the first fully automatic service station in the world". Their agreement with the concerned Ministry was that they would be removed if they were unpopular with the public - and they were very unpopular.

Washington, Birch and Woolley Edge were the first services to open with only one brand of fuel available, further reducing costs.

Where Taverna began to fall down is that they didn't know what to do next. The grand facilities at Washington were left in a state of half-automatic, half-waitress service mess. Meanwhile, four more approved sites were about to open, and their plan to fit them all with automated catering had just fallen apart. Those services opened with delays, and with more half-baked catering arrangements.

Esso's owners were not helping their panicked company, and refused to provide any more money for their venture. This left them looking for a buyer - and fast - the first time the motorway business had seen such a crisis. Five years prior, the government had seen exactly this coming.

Esso blamed government regulations for the failure of their venture, and the government's rigid incompatibility with Esso's style certainly contributed. However, the government pointed the finger at Esso's failure to properly manage their sites. An example they gave is that the government repeatedly told Esso they expected one member of staff from each service area to be act as a manager for the whole site. Esso gave the government a list of those people, but when the government arranged a meeting with them, all five of them said they were in charge of the catering but had no authority over the petrol station.

Granada and Rank were known to be interested in buying Taverna's services and kitting them out in their own style. A stumbling point for Rank was that they wouldn't be allowed Leigh Delamere as it would give them a monopoly. At the other end of the scale, Granada had absolutely no interest in the isolated and poorly-reputed Washington, and were willing to do anything not to end up with it.

Granada did eventually agree to purchase all five sites, Washington included, for £2.1million (1973; £24.7million in 2016). This made them the largest operator on the motorway network. They subsequently refurbished all of the sites, paying particular attention to the catering.

The following services were owned by Taverna:

The following services were planned by Taverna but they were never built.