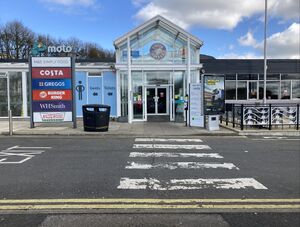 It's very rare for Britain's motorways to offer a small facility in one direction only, but that's exactly what Burton does.

First 2 hours free for all vehicles, after which cars must pay £15 and HGVs, caravans and motorhomes £22. HGVs can pay £25 to include a £10 food voucher.

Prices are paid using PayByPhone. The location code is 2430.

The service area opened on 23 October 1970, operated by Mobil and named Burton West. The "west" appeared to stem from the fact only the western half was built, rather than being west of Burton.

In 1978, a partnering Burton East services was considered, but cancelled due to low traffic levels. Extra applied to build a southbound service area opposite the existing one in 1996, but their plans were refused as there were now enough service areas nearby.

The location of the service area had been chosen by the Ministry to catch Lakeland traffic. The initial location was going to be near Keer Bridge, but it was moved north to be further from M6 J35.

All of the north west's service areas would be on one side of the road only, to reduce the environmental damage and encourage bids from operators who might not want to invest in two buildings at a site where custom was expected to be extremely low.

A trial tender process began where only a £30,000 investment was requested, a very short lease was offered and only minimal catering was provided. This would be attractive to oil companies with little catering experience. The contract was titled "Burton (West)", which is how it became 'Burton West services'.

Responses were received from Texaco, National Benzole, Esso, Total, Alpine and Mobil; the Ministry were very impressed by this outcome and used it as a template for all the service areas to the north of here.

Texaco and National Benzole were quickly ruled out for their poor design work. Esso and Total both made a very poor financial offer. It therefore came down to Mobil and Alpine.

Alpine wasn't yet formed but was led by two people with direct experience in motorway service areas. Their bid was described as a "pity" because it looked like a good facility with a 60-seat snack bar, but their rent offer was half of Mobil's, which was called a "prestige bid".

The suspicion was that Mobil were trying to buy their way into the market, but their plan seemed good and the Ministry needed the income. Mobil won the contract, with a 31-seat snack bar and their own brand of fuel. 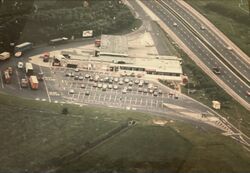 Granada branding at the extended service area, in the late 1980s.

When Mobil's first building opened, it was described as "disappointing and unimaginative" by inspectors, who were disappointed that the building didn't take advantage of the views. It had only a tiny amenity building, a fuelling area with 12 distinctive circle-shaped segments, and a small parking area with only a handful of spaces for long vehicles, next to the cars.

In 1972 and again in 1977 Egon Ronay rated the service area as "appalling", calling it "drab and simply furnished".

When the site reached full capacity, Mobil allowed Granada to build a full catering building, and the two ran the service area together. They settled on a simple design which offered fuel and service facilities from either ends of the same building. That design had separate doors for the toilets and for the restaurant.

A new forecourt shop was built, allowing the main facilities to take over the rest of the old shop, which was extended a few times. The parking areas were expanded significantly, and a hotel was built. An official count in 1983 reported that Burton West could accommodate 20 HGVs, the lowest capacity for any motorway service area in England.

The British Tea Council chose Burton West as the site of Britain's best motorway tea in 1989. The management put this down to them using local Lake District water.

Granada announced in June 1996 that they had permission to change Burton West's name to Burton-in-Kendal. They were hoping that more generic names would be more memorable, easier to advertise and deter rivals from opening nearby. This was one of the only name changes that stuck.

In more recent times, Moto have tried to encourage customers to use both the toilets and the restaurant by building a glass cage around the front, creating a walkway rather than separate entrances.