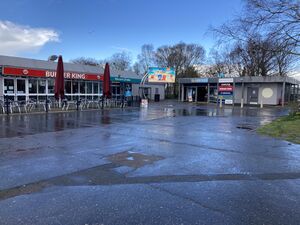 One of the M6's last places to stop now mostly serves snacks.

Prices are paid using PayByPhone. The location code is 2461 (northbound) and 2462 (southbound). 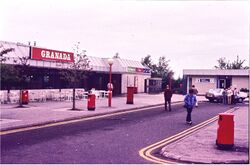 Southwaite has always been the most northern motorway service area on the M6 (but not in England, Washington takes that title). In 2008 the motorway was extended northwards and gained a new service area, Todhills, but that is only a rest area, meaning that technically Southwaite can still claim its title.

The southbound M&S Simply Food store opened on 16 March 2006, and was opened by the then-captain of Carlisle United FC Kevin Gray.

During early 2017, the northbound EDC restaurant was removed to make way for a West Cornwall Food Co unit and M&S Simply Food store. The West Cornwall Food Co unit opened on 17 March 2017 followed by the M&S Simply Food store on 23 March 2017, joining its southbound counterpart. The southbound EDC then closed in summer 2019 and was partially replaced by a Greggs store.

The southbound West Cornwall Pasty Company kiosk was removed in early 2022 with the equipment being transferred to Exeter's new kiosk.

During April 2022, the northbound side received a refurbishment, with new toilets and showers as well as f'real Milkshake and Tango Ice Blast machines. The &Play gaming area was removed at this time. Moto are also seeking to build a Changing Places facility on the southbound side.

As the M6 made its way to Carlisle, it was decided that one more service area would be needed, as the A74 onwards didn't have enough facilities. Suitable sites were found at Chapel Hill, Roads Ends and Southwaite, of which it was decided Southwaite was the best.

Tenders were invited in October 1969, where it was described as a "low value" site. Like the service areas south here, traffic levels were expected to be very low. No responses were received.

Taverna eventually won the contract, and opened the service area in 1972.

In 1974, the Department of the Environment's MSA Board (the government regulators at the time) let on that Southwaite was their favourite of all the buildings they would inspect.

The second building was added in 1977, after Granada had taken over from Taverna. Granada also refurbished the northbound restaurant, with both offering self-service catering only, which turned out to be a popular set-up.

In 1977, Egon Ronay rated the service area as "poor" Despite it being "well organised, clean and tidy", it was let down by a number of catering issues, such as selling doughnuts which are "like a cannon ball". Despite this, the government continued to speak highly about it: Peter Prior reportedly praised its good food and efficient, friendly service.

In 1995 the service area was sold by the Highways Agency to Granada for an undisclosed sum, except to say that it was one of England's most expensive.

40 years on from it being described as a "low value site", and despite the competition from the very famous Tebay, Moto spoke about how popular Southwaite is. Even so, by 2017 it had been reduced to a limited menu of snack catering.

Since 1976, the site was home to an English Tourist Board information centre, which held an large range of information for Scotland and England. This closed to make way for the Greggs outlet, with tourists directed to M6 J45 instead.

Granada were given permission to change Southwaite's name to "Carlisle" in June 1996. The proposal was abandoned due to the cost and poor reaction, although the new name was used in some of their publicity.

In 2008 there were plans to build a second hotel here, on the northbound side, but it's not clear what brand it would have been as Moto had been looking at brands other than Travelodge.