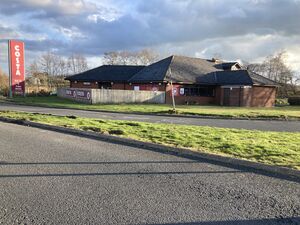 The first of a new era, Todhills was supposed to inspire a whole new generation of rest areas. 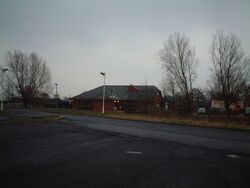 The Little Chef at Todhills North, pictured in 2006.

This rest area has sometimes been referred to as 'Moss services', referring to the Moss Café. BP still refer to their branch as this. It is also referred to as a "services" on the M6's electronic signs when there is a problem.

As a result of its history, the filling stations on each side here have different operators, usually charging a very different price. The southbound side also has a huge abandoned area where the old truckstop was: this hasn't been used in 20 years and is now mostly just rubble, despite the updated road layout including provision for it to be built on.

The A74 was the busy and important road between Glasgow and Carlisle. By 2008, the section immediately north of Carlisle was the only part of the route not have been replaced by a motorway. This road, which was notorious for its outdated design standards, had its own service area at Todhills.

The southbound service area was developed in the 1970s - probably after the road was dualled in 1970 - as the Moss Café and filling station. This would become a well-known landmark, with a coal fire which was popular with drivers.

In 1989, a Happy Eater was built next to an existing filling station on the northbound side. This became a Little ChefHistory in 1993, which gained a Coffee Stop that became a Burger King.

The Moss Café was sold to Forte and demolished in 1999, being replaced by another Little ChefHistory and a Travelodge. With both sides of the road now having a Little Chef, it looked much more like two sides of a single service area. Since 1993 they had planning permission for a "motorway service area" here, though nothing on this scale was ever built. Both service areas had about eight acres of land, with most of it lying unused.

When the Compass Group created Moto, Todhills was regarded as a major service area, and was treated as one of their sites. After Compass sold Little Chef, Moto continued to operate the Little Chefs under a franchise agreement. They advertised it as a "separate site" on their location listings until 2008, when it was removed, although it was later put back.

Like many facilities on the A74, it was assumed Todhills would be closed when the road became a motorway. A few miles up the road 20 years ago the same situation had seen Gretna be replaced, but as Todhills had nearby alternatives it didn't look like that would happen here.

As negotiations to arrange the upgrade of this section of road reached delicate stages, a commitment was made to route the road around Todhills, and to provide it access to the new road. This couldn't normally be fulfilled as the service area didn't meet the standards necessary for it to be connected to a motorway, and it appears the commitment was made before the plans were fleshed out in detail.

A few months before the new motorway opened, the Highways Agency conveniently announced the creation of a new class of facility. Called a motorway rest area, it would be a small motorway service area which didn't need to provide food or fuel. Todhills would be the pioneering example, with its rest area status chosen because it had limited food options.

When the road upgrade was completed, Moto swapped the Little Chef at Todhills for a Costa, claiming it fitted the concept better - although in reality it was to fit their national portfolio. This created an unusual situation for Moto where the Costa brand is applied across the whole building, including the lobby and former kitchen, with little evidence of it being a Moto-operated site. The southbound building used to have a large advert promoting Moto's M&S at Southwaite services.

Other motorway rest areas have since been designated, but as of 2021, they all have ambition to become a full service area. Todhills looks set to be the only one in the long run.

The new motorway needed to take away the access road that used to run to the right of the southbound forecourt. A new access road was built on the left-hand side, which is why this road is surprisingly well-marked for such a small service area: it was designed by the team who had been designing the new M6. This may also explain why the new road refers to the Costa by the unusual title "Food & Rest", as the project team would have been used to avoiding brand names.