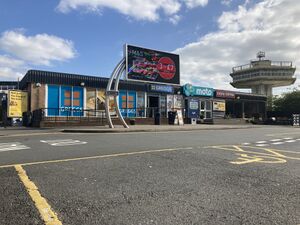 Quite possibly the most iconic service station of all, Lancaster is famous for its large tower sticking out of the northbound building (see trivia). Today, Lancaster has been moved around quite a bit, with the toilets now at the back. The tower is closed to the public.

First 2 hours free for all vehicles, after which cars must pay £15 and HGVs, caravans and motorhomes £25. HGVs can pay £28 to include a £10 food voucher.

Prices are paid using PayByPhone. The location code is 2448 (northbound) and 2449 (southbound). 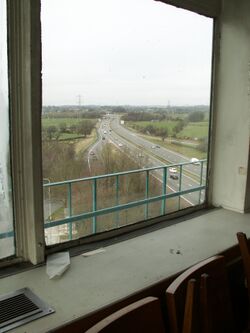 The view which used to be available from the tower-restaurant.

The service area opened as 'Forton services'. For many years this name was used on all example diagrams of road signs, including drawings of non-motorway signs.

The land is owned by The Crown Estate, making this the King's motorway service area. This is mostly an administrative title which has little practical impact, and the reigning King is probably unaware of and uninterested in his association with these facilities.

Since July 2020, Lancaster has been taking part in the "fuel price drop", where Moto have pledged to compete with local petrol stations.

Moto are seeking to build a Changing Places facility next to the northbound amenity building.

The service station is known almost exclusively for the 65-foot (20m) tower attached to the northbound building, visible from afar on the north side and described in one publicity leaflet as being "a luxury observation platform". It closed in 1989. Full details are given on its own page.

Contrary to a baseless rumour that a few individuals are keen to spread in discussion groups, there is no proposal to demolish The Pennine Tower, and neither will Lancaster services be moving to Hampson Green. If it was being built from scratch now then that is probably where it would be built, but the fact is it already exists and it would be extremely difficult to move it.