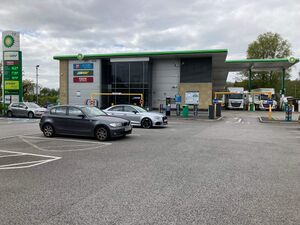 Signposted from the road? From A59 only

First hour free for cars, after which the following charges apply:

There is no parking available for vehicles over 2.1M high.

Prices are paid at the pay machines situated in the car park or via the Good2Go Parking mobile app.

These fees are strictly enforced by ParkingEye.

Parking within the hotel car park is for hotel guests only and is barrier controlled. 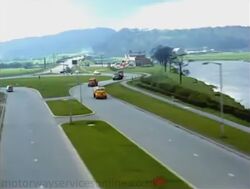 The first building here was built in the 1930s on Preston New Road, called the Riverside Café. The eastbound A59 access road is the original alignment of the road. As a result, it was initially known as Riverside services.

In 1958 the UK's first motorway junction was built next to Tickled Trout, causing the road to be diverted and a lot more traffic to be attracted to the area, despite never having been signed from the M6.

The café went onto gain The Tickled Trout Hotel to the west, and fuel facilities to the east, which have been provided since at least the 1970s and were originally provided by Mobil. The hotel was originally owned by Carton Holdings, with Riverside Restaurants providing the catering, and later joined the MacDonald's Hotels chain in the mid-1990s.

The hotel has received several extensions over time. In 2004, permission was granted for the western end of the hotel to be demolished to allow for an underground overflow parking area to be built. These plans would have also seen the existing eastern end of the hotel receive an extension up to five-storeys high to compensate for the lost rooms. These plans were renewed in 2013 but were never used.

The forecourt has also received several refurbishments, with Mobil refurbishing the site in the 1980s and 1990s. As part of their 1995 refurbishment, Mobil had planned to introduce a fast food restaurant to the sales building but this was later scrapped. McDonald's also submitted plans in the same year to build a stand-alone drive-thru restaurant adjacent to the hotel but these plans were refused. The site was rebranded to BP in 1997 following the merger of Mobil with BP.

The filling station was later sold to The Brookfield Group in the mid-2000s who were granted planning permission in 2007 to extensively rebuild the forecourt, introducing a new two-storey sales building to the site with a shop on the ground floor and a restaurant on the first floor. These works took place in 2010, at the same time as the nearby junction improvements, and the new sales building opened with Brookfield's own-brand shop which included a 'Fresh Bake' bakery which served Douwe Egberts coffee on the ground floor and offices to let on the first floor rather than the restaurant as planned. The original plans for the building included mentions of a possible BP Connect branded store as well as a Subway store in replacement of the bakery.

The first floor offices were empty for the first couple of years until 2012 when the area was converted to a retail unit and became home to The Cake Decorating Company. They later vacated the building in 2017 and the unit is now up for let once again.

The sales building became a Nisa Local store in 2014, and in late 2015 the bakery was replaced with a Subway store. Coffee is now provided by Costa Express machines.