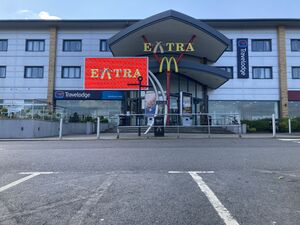 The M65's only signposted service station, which is owned by McDonald's but leased to Extra, who themselves sub-let the retail units out. 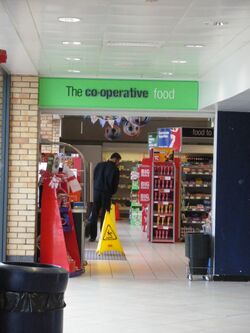 As befits its unusual history, this is one of the strangest motorway service area buildings to walk around.

The main building feels like two completely separate buildings which happen to be inter-connected. On the far end is a single-storey McDonald's restaurant with large windows and its own entrance, and from here you can walk into a corridor past some café units, ending at a supermarket. This end of the building has a three-storey hotel stretching across it, with the 'official' building entrance in the middle. A third entrance, at the very end, used to offer direct entry into the supermarket.

The Department of Transport stopped being involved in service area planning in 1992. No mention was made of Blackburn, probably because there had been no work to pass on. Instead private companies used their new powers to put forward several options for new service areas, which were examined.

These included suggested sites near Preston, plus Antler Project Management Ltd's plan to build north of M65 J5, dated 1992. The M65 had been designed to attract new development, so there was no shortage of feasible locations.

Meanwhile, Shaftesbury Commercial Properties Ltd had planned a site for business, industry, restaurants, a hotel, housing and a petrol station in the area around Oakencroft Farm in 1991. They referred to this as Earcroft. This took until 1995 to be approved, but the Department of Transport confirmed that they were treating it as a potential motorway service area, which they referred to as Blackburn South services. The location, deep within an industrial estate, doesn't actually touch the motorway boundary, so it's one of the loosest possible interpretations of a motorway service area.

Petromar Plc took forward that service area proposal in 1999. The name Blackburn Interchange was used, though this turned out to be name used to promote the surrounding land. The following a year a final name was agreed with the Highways Agency, on the advice of a consultancy service, and the service area was to be called Blackburn services.

The service area opened in 2002. The BP forecourt and shop were operated by Margram, and there was a large McDonald's restaurant, which was advertised as the site operator. There was also a Little Chef restaurant, which they marketed as a replacement for the Samlesbury branch on the A677, which they said was too small.

Shortly after it opened, there was considerable upset over its name. The M65 formed the boundary between Blackburn and Darwen and the new service area was slightly on the Darwen side. Most of the staff were recruited from Darwen and convinced Margram that the name 'Blackburn services' was inappropriate. The Highways Agency seemed to be reluctant to change the name, so staff circulated a petition among customers which attracted 1,000 responses.

Six MPs raised a motion in Parliament in July 2003, calling the situation "outrageous" and a "denial of the wishes of the people of Darwen". However at this point the Margram facilities were sold to Extra, who initially decided that the 'Blackburn services' name would stay because it was more recognisable to long distance traffic. Angry councillors began to campaign around Darwen to draw attention to the matter.

Extra soon conceded that the name could be changed to 'Blackburn with Darwen services', in doing so acknowledging both towns and avoiding any accusations of bias by using the same name as the local council. Extra also agreed to promote Darwen from inside the building. The Darwen councillors remained unimpressed, saying that "people feel that their individuality is being taken away".

The labels around the building were changed to say 'Blackburn with Darwen' by the end of the year, but the road signs took much longer to change, owing to disagreements over the cost of manufacturing the patch. The motorway signs were eventually badly covered-up in 2005: the old name could still be seen behind the patches.

Extra signage had appeared on the site by 2008. As with all Extra service areas, the BP forecourt switched to Shell in 2008.

As well as the Somerfield store inside the BP forecourt, the main service area building used to be home to the only full-sized Somerfield Essentials supermarket on the motorway network. This was rebranded to Co-op Food following the merger in 2009 but was eventually replaced by Budgens in 2016 following a corporate sale. Budgens later closed on 27 February 2017 as the franchisee which operated the store went bankrupt.

The Chopstix Noodle Bar closed during the Coronavirus lockdown in March 2020. It didn't reopen until 2 December 2021; Chopstix's final unit to reopen following easing of lockdown restrictions.