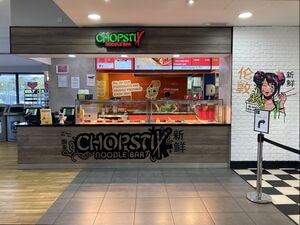 Chopstix Noodle Bar is a noodle bar-styled restaurant which was first introduced in 2013 to two of Extra's motorway service stations. It operates as a fast food restaurant, serving chicken and vegetarian dishes.

Chopstix also have a two-year partnership with Applegreen, which saw it open at their service areas across the UK and Ireland. This decision was made before Applegreen acquired Welcome Break; during the takeover, it was pointed out that a mutual appreciation of Chopstix was something they had in common, and since then more Chopstix branches have opened.

Between Chopstix Noodle Bar, Chozen Noodle and Chow, as of 2017 most UK motorway services feature some sort of Asian-themed fast food restaurant.

Chopstix Noodle Bar operate at some Welcome Break and Extra services. They are: [view on a map -  Download KMLrefine search]