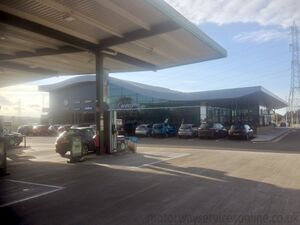 M2 north-westbound between J4 and J5

Northern Ireland's first motorway service area has a smart building and has proven popular, albeit a bit cramped.

Further information is not available, please update this if you know. 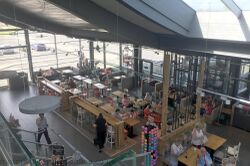 Northern Ireland only has two motorways of any significance, and even those two quickly run out, so it's no surprise that the Northern Ireland Roads Service had insisted that there was no need for any service areas on their motorways.

Despite the lack of enthusiasm from the authorities, the landowner was keen to take advantage of their position, so plans for a service area here actually date back to 1994. Trusthouse Forte received planning permission for it, and said they would be building a Little Chef and Travelodge on the north-westbound side, with parking on the south-eastbound side. They were committed to landscaping the site, to avoid what they called "the concrete monstrosities" in England.

At the time, all Forte motorway sites were branded 'Welcome Break', but that brand wasn't named here. It may be that it was simply missed off the list, or it may be that this was only a small site and Forte didn't want to introduce too many new brands in one go. £8m was set aside for the project.

Forte specifically said their intention was to capitalise on the increase in tourism that would follow the 1994 ceasefire. It's therefore possible that the resumption in hostilities in 1996 is the reason that this wasn't built. More likely is that when Forte tried to sell their roadside brands in 1995, all new ventures were put on hold.

The planning application was renewed in 1999, with Applegreen's name on it. It was then renewed again in 2012.

Applegreen initially only built the outbound service area. The building opened in April 2015 and introduced Northern Ireland to its first ever Greggs store, which attracted some media attention. The design of the building was later copied by an almost-identical Lisburn services.

In November 2018 Applegreen purchased a significant stake of Welcome Break. One of the trade-offs of the purchase was that suitable Applegreen sites would be managed, rebranded and refurbished by Welcome Break, which would allow the combined firm to manage its assets better and give Welcome Break a clear benefit to the takeover. Templepatrick was later listed as one of their "suitable sites".

As of 2020, no rebranding has happened, but minor internal changes have been noticed. For example, during the COVID-19 pandemic, diners at Templepatrick services were asked to record their visit on Welcome Break's website.

In February 2019, Applegreen registered a planning application which says they are still looking to build the corresponding south-eastbound service area.