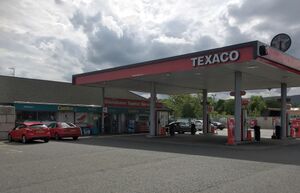 Glenshane Tourist Services operates a signposted service area at the start of the scenic Glenshane Pass. Customer toilets are provided in an separate portable building which is locked at night.

There was a plan for a hotel to be built immediately to the west of the service area in 2014. This proposal was renewed in March 2021, and it can now be built on Fallagloon Road.

There is also a proposal to demolish the existing service area and built a new, much larger site. A new petrol station would be built to the west, with a two-storey building including toilets, two food units, a deli, a drive thru, a shop and a seating area. New parking spaces would be provided for coaches, HGVs and cyclists. A new access road would run through the middle of the site, with a safer junction with Glenshane Road. The Oakleaf Restaurant would remain, with its own dedicated car park.

The proposal is currently in the early stages.