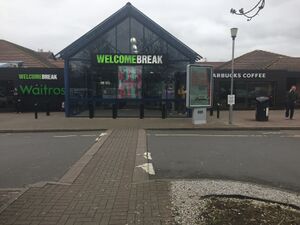 The UK's second-largest operator, Welcome Break have been extensively refurbishing several of their services (even rebuilding Sarn Park entirely) and replacing restaurants with a whole-new range of takeaway food brands. They were also quick to roll-out stand-alone Starbucks drive thrus wherever possible.

In November 2018, Ireland's largest service station operator Applegreen purchased 55% of Welcome Break. Applegreen explained that they would be responsible for the brand's overall "strategy and operations", while Welcome Break's management would take responsibility for Applegreen's existing UK locations - though this may just mean the larger ones.

As a result, Welcome Break are now promoting a special "fuel good" fuel, which is also used by Applegreen. There have been rumours that Applegreen are preparing for a "price crash" at Welcome Break services. 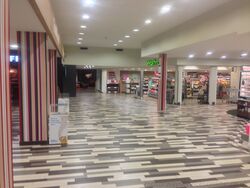 The new styling being applied to their services.

Welcome Break own many of the UK's oldest motorway buildings, including Charnock Richard and Newport Pagnell. An expansion in the 1990s has given them several newer-style buildings too.

Their retail offer is made up mostly of Waitrose, backed up by WHSmith, and they are introducing collection points aimed at commuters. They have recently taken a new interest in dedicated facilities for HGV drivers, having opened Rothwell Truckstop in 2019, and proposed two separate buildings just for HGV drivers.

They were one of the first operators to take social media seriously, which they continue to use to promote their facilities. Welcome Break also regularly support Children In Need.

Welcome Break announced a partnership with Too Good To Go in February 2021, whereby leftover food would be sold in special bags. The trial begins with 10 of their Waitrose stores.

Having led several refurbishment programmes, throughout 2015 Welcome Break redesigned most of their food courts, introducing Subway, Tossed, Papa John's Pizza and Harry Ramsden's to the motorway network, but doing without the traditional restaurant all together and relying on Harry Ramsden's for the breakfast trade.

Welcome Break then reintroduced sit-down dining under the established brand PizzaExpress, with separate restaurants opening up outside their services.

Some of these units are operated by Welcome Break at other operator's services, including Cobham.

Brightly-coloured wood-effect styling is used for many of their fittings, flooring and corporate signs.

Welcome Break have always taken their roll in providing motorway hotels seriously, right back to when they leant their own name to the Welcome Lodge. This became Days Inn (also Days Hotel), including some sites they operate away from the motorway network and at other operator's services.

Days Inns are now being replaced by the more upmarket Ramada. In April 2019, Welcome Break opened a new Ramada in central Scotland.

Applegreen's takeover of Welcome Break took effect in January 2019. A number of services are expected to transfer to the Welcome Break brand. Welcome Break own almost all their own forecourts and have operated them under the Shell brand for a long time; Applegreen are effectively a rival to Shell.

While Welcome Break and Applegreen have been publicly supporting each other on Twitter, several more changes were noticed. In March 2019, Welcome Break opened a new truckstop at Rothwell. The petrol station attached to it carried no branding other than Welcome Break's name. Planning documents for it were sent from Applegreen's Dublin office, and the forecourt advertised that it accepts Applegreen's fuel cards.

In July 2019, Welcome Break removed Shell's deli2go from their forecourts, using their own creation, 'The Deli', instead. Hopwood Park was chosen as the place to launch "fuel good", a new type of fuel which they say is exclusive to Welcome Break (not Shell). "Fuel good" is an Applegreen promotion, and Welcome Break are promoting it with Applegreen's colour scheme. Welcome Break also claim "fuel good" is the cheapest fuel on the motorway, a sign that they are adopting Applegreen's strategy of using low fuel prices to attract customers. This is a strategy that is rarely seen on the UK motorway network.

Applegreen briefly considered selling Welcome Break's hotels, but concluded the partnership was good for both businesses. They said that they expect the benefits of working with Welcome Break to be "significantly larger than our previous expectation".

Welcome Break currently work mainly with the following brand names, either as a franchise or similar arrangement, or as one of their own creations:

The Welcome Break name was originally nothing to do with motorway services - it was an old name which was recycled and held on to. They went on to become the pride of Trusthouse Forte's family, and despite several names and changes forced upon them by Granada, the name continues to survive.

Welcome Break themselves chase their heritage back to the construction of their Newport Pagnell site in 1959, rather than the past uses of the Welcome Break brand.

When Welcome Break was merely a motorway restaurant to rival Little Chef, circa 1974-78, its logo had a purple silhouette teapot figure with legs, a head and a chef's hat, inside a triangle with a red outline similar to an upside down Give Way sign. The accompanying text added "Highway Family Restaurants" at the bottom.

In 1988, this was replaced by the memorable swan logo and blue colour scheme, which can be seen to the right. It was designed by the Michael Peters Group for Forte's rebranded Welcome Break. Internal road signs were created to match the shape of the logo. Their buildings were often painted pale blue.

In total four versions of the swan were produced: one had a very pale background and black feet, and the second had a darker background and yellow feet. A bigger change was made in 1998, as more styling was applied and a sunrise was added to the graphic; knew internal road signs were created to match this. The fourth version of the swan was used by Welcome Break's French sister company Côté France.

Around this time they advertised their service areas with the slogan "High St. prices". The swan was often applied to the front of their buildings, with a blue background, and the rest of the buildings were usually grey. The Welcome Break service area at Warwick were given a hill figure of a swan made of quartz that same year, although it never resembled the swan on the logo, and is no longer there.

A major refresh was carried out in 2006 by Fitch. There was a new green-on-black colour scheme, and the front of each building was given a large photo to resemble its location; the same photo was used on some signage around the site.

The buildings were repainted again, this time turning black. The company name would be written in Impact, and was designed to stand out. New internal road signs were created to match the new colours.

Welcome Break did consider turning their buildings into giant 'supergraphic' advertisements. These were all refused on road safety grounds and the idea, which would have significantly changed the appearance of some of their sites, wasn't taken any further. The buildings were instead painted in a cream colour.

While the Fitch logo and colours remained the same for some time, there were some minor changes to their styling. The photos were mostly gone by 2010 and new totem poles were placed at the entrance. From 2017, they started calling themselves "Your Welcome Break", and signs with this slogan were usually followed by a dubious established date of 1959.

Changes to their use of colours began to be seen in July 2019. The new shades of green allowed them to carry over Applegreen promotions. A totally new logo, with a different font and black colours swapped for grey, was used for refurbished forecourts. This new logo began to be used elsewhere from March 2020.

Welcome Break has teamed up with KFC, Waitrose and Starbucks to appear on their motorway signs, having previously used Sainsbury's, Burger King and Coffee Primo. At the end of the trend of pushing brand names further than their own, many road signs no longer used the Welcome Break branding at all. This changed with the new motorway sign which allowed some brand logos, at which point the Welcome Break logo returned.

A list of services ran by Welcome Break can be found on this list, or you can view them on a map.

With the success of the Days Inn hotel brand, Welcome Break had a hand in a hotel in central London. They no longer run this but do have similar Ramadas near Wakefield and Glasgow. They have since expanded the hotels at London Gateway and Birchanger Green to use the more upmarket 'Days Hotel' name, now Ramada.

In addition to this, Extra have let out most of their facilities to other companies, many of which have been taken up by Welcome Break:

The following services were once branded as Welcome Break:

The following A-road sites were ran by Welcome Break in the 1970s. Many of their locations are included on the Happy Eater map. 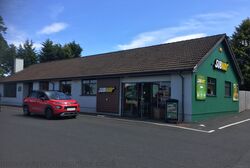 A Subway building at Hillsborough, ripe for Welcome Break branding.

As part of Applegreen's takeover, a number of services were proposed to be transferred from Applegreen to Welcome Break. These were the ones which most suited Welcome Break's existing estate, including several in Northern Ireland where none of the usual UK motorway service area operators are to be found.

As of November 2020, no public changes had been made, but there had been some internal changes. For example, during COVID-19, several of these sites used Welcome Break's track and trace system. Welcome Break are managing these sites, but they are still publicly branded as part of the Applegreen estate:

Welcome Break's parent company holds permission to build Newark (Fernwood) on the A1, but that is likely to be branded Applegreen.

The following services were planned by Welcome Break but they were never built: