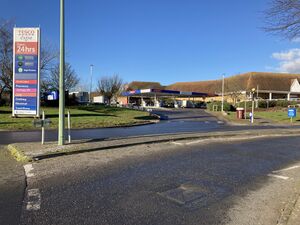 9 more photos in the gallery
Location:

Today there is a retail park next to the A1214 which is signposted as services. Historically, it was a major service area on the A12 and what is now the A14, but most of the signs were taken down in 2010. The services can still be accessed from A14 J55.

Other facilities are available as part of the retail park but these are the only facilities signposted as part of official signage.

Parking is reserved for users of the respective stores. In addition, a number of HGV spaces are provided next to the petrol station (charges not known). 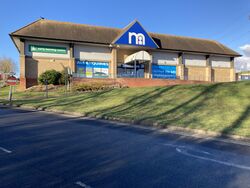 Copdock really shouldn't count as a service area; it is no more special than any other supermarket next to a fast food restaurant. However, on the A1214, Suffolk County Council continue to erect signs saying 'Services', either as a tribute to the site's unusual history or a reference to the lorry parking.

The London Road park and ride site is accessed through this area too. 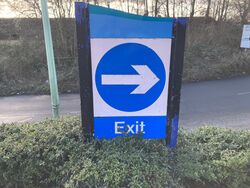 The final surviving piece of Welcome Break branding, still located in the Burger King drive thru.

You wouldn't guess it today, but this service area was actually part of the Welcome Break estate. They and Granada were in competition to cover the most ground, and both were looking at A-roads.

The Tesco superstore opened in November 1987, and the main service area is understood to have opened in the same month. The main amenity building was a low, brick building with a tall, red roof. Inside was The Granary and a branded shop.

The site was named after the Copdock Mill Interchange on what was the A45. This was itself was named after the nearby Copdock watermill. As a result, the interior of the main building was themed around mills. The décor included a model of a windmill sail, photographs of local mills and a mural by David Fisher.

The petrol station behind it was branded Texaco, and operated by Welcome Break, with HGV parking alongside it. The exit route - which involved driving around the supermarket - was at least half a mile longer than the simple and direct entry route.

The site appears to have quietly closed at the end of 1994, after only a short life and leaving behind little evidence. A planning application to demolish it was registered in July 1994, with Abbeygate Developments signing a contract that September, but Welcome Break were still promoting it in their October 1994 advertising campaign.

Regardless of exactly when it closed, the petrol station was sold to Tesco (the main supermarket has since been extended to bring it much closer to the petrol station), and the amenity building was demolished and replaced by Mothercare. A Burger King was built in the car park.

Following the closure of the main facility, Highways England eventually removed the road signs from their roads in 2016, but the local authority continues to promote the retail park as a service area.

Despite the lack of detail available, there is still a tiny amount of evidence of the site left: a single Welcome Break styled road sign in the Burger King drive thru, and there are a few double-globed street lights in the car park.

Following the collapse of Mothercare in 2019, that store is now empty.