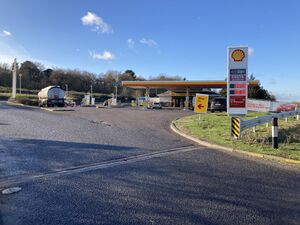 The very last service area on the A14 is a small petrol station with a large lorry park, on the westbound side. 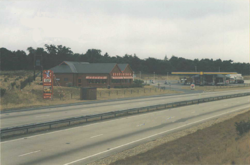 The service area was developed in a triangle of land which was cut off from the rest of the field by the construction of the new A45 Ipswich bypass in the early 1980s.

Following the completion of the bypass in 1985, Lawlor Land Co planned to develop a full service area on the westbound side of the new road with a petrol station, restaurant and hotel being proposed in 1986. The plans were amended a year later with the hotel being removed and Shell listed as the forecourt partner.

Construction began on the Shell filling station in early 1989 with Trusthouse Forte proposing the Nacton branch of Little ChefHistory around the same time. Both facilities opened later that year.

The Little Chef restaurant closed in 2007. The building went onto become home to the Vindaloo Curry House and then the very short-lived Orwell Restaurant. After a period of being derelict, in 2016 the building became a Shell training centre.

Shell currently hold planning permission to redevelop the existing forecourt with plans to install new pumps and canopies for both car and HGV forecourts as well as a new, much larger sales building and two Shell Recharge electric vehicle charging points.

Although there is now no official eastbound equivalent, there did used to be a Nacton Heath services a few miles away.