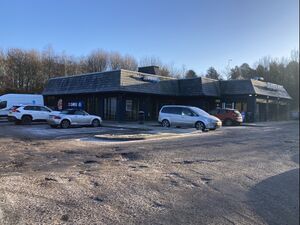 One of East Anglia's largest service areas, Beacon Hill is trying to decide what it wants to be next. 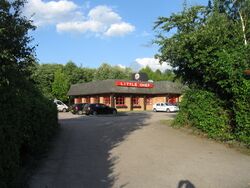 A service area here was first proposed in 1980 as a filling station, restaurant, café, hotel, toilet block and parking for all vehicles. This was developed by Norfolk House, the owners of Kelly's Kitchen, in partnership with Petrofina. It opened with those two facilities in 1988.

Shortly after opening, Kelly's Kitchen was acquired by Forte, who turned the restaurant into the Beacon Hill branch of Little ChefHistory in 1989. A Travelodge was added to the site, which opened in June 1994. The restaurant went on to gain a Coffee Stop in 1995 and new owners Granada added a Burger King in 1998.

After Euro Garages purchased Little Chef, it was expected that this site would become a Starbucks. That didn't happen, and time ran out in January 2018 when their rights to use the Little Chef name expired. As a result, Euro Garages turned it into the temporary brand EG Diner. With still no plan for it, the EG Diner closed in October 2018. It was replaced by a Greggs with the Burger King also receiving a refurbishment in the process.

Shell redeveloped the forecourt in 2022. A new sales building with a smaller canopy and new pumps opened towards the end of the year.

Meanwhile, EG Group requested planning permission to build another service area opposite their existing one, which they wanted to call Needham Market services. They described the existing facilities as "dated", and propose to build two drive thru restaurants, a petrol station, and a compact parking area with bays for HGVs and coaches. Their proposal was rejected in March 2021 because of its impact on Needham Lodge.