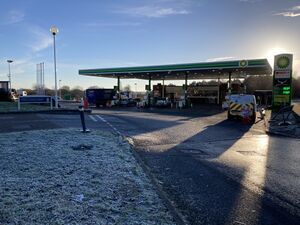 This service area is on the A14 near Stowmarket, and shouldn't be confused with the Tot Hill on the A34 near Newbury.

The Tot Hill service area is positioned on an old section of the A14, easily accessed from one of the new junctions. 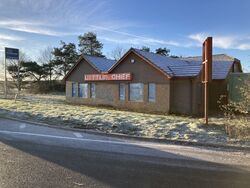 The former Little Chef, still with its signs.

Tot Hill services started out as a garage and a bungalow on the A45 Bury Road known as Tothill Garage. This gained some industrial units, and then the road became a dual carriageway.

With that forecourt now only serving the eastbound side, in 1986 a new Tot Hill westbound opened, just west of here. This was widely known as Haughley Park services. It had the Stowmarket branch of Little ChefHistory, a Mobil filling station and a Travelodge from 1989. The filling station went onto become BP branded.

Both sides of the service area suffered in 2008 when the Haughley Bends section of the A14 was bypassed. The old A14 was relegated to the less catchy number of A1308, but access was still available from a new interchange positioned in between the two petrol stations. Despite this, the westbound petrol station bailed out and closed to become an commercial repair centre.

Meanwhile, the Little Chef was given new signs from the new junction, and appeared to be attempting to stay open. However, reduced trade and the well-established misfortune of the brand meant it was a prime candidate for the 2012 closures, closing in September. Signs on the roundabout and the building still advertise Little Chef, and the boarded-up restaurant is the unfortunate landmark Travelodge customers need to look out for.

In 2014, there were plans to turn the former restaurant building into a church, but this didn't happen.