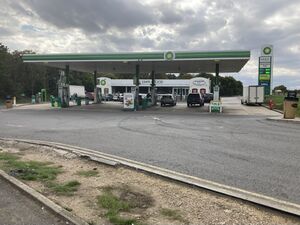 A service area shared between the A11 and the A14 on the Newmarket Bypass, with a subtle nod to the nearby racecourse. 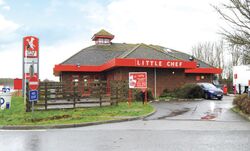 The service area is known as Newmarket, but each side comes with its own horse racing pun: the westbound forecourt is called Rowley Mile, and eastbound is called 1000 Guineas. The eastbound car park backs onto a local road, providing a secret exit.

Initial plans for a pair of service areas here came in 1983 when Landware Group Holdings, who called it 'Newmarket Heath services', submitted plans for each side to include a filling station, restaurant and toilet block. They claimed they were building it to resolve the lack of services on the M11, although the M11 is some distance away. It may be that they wanted to allow for possible services at Newport, or simply that they wanted additional traffic from the A45.

The site opened in 1984 with a pair of Happy Eater restaurants and Mobil branded forecourts. In the mid-1990s, the restaurants became Little Chefs.

In 1997, the filling stations were rebranded to BP which they continue to trade as to this day. By 2003, BP had added their Wild Bean Café to both sides. In 2012, both filling stations gained M&S Simply Food stores.

The westbound Little ChefHistory closed in 2007 and remained empty until 2014 when Euro Garages purchased the building and refurbished the site, opening Starbucks and Subway stores inside the building. The car park also gained an Ecotricity electric vehicle charging point.

This Subway store later closed in April 2022 owing to recruitment issues due to the location. The electric vehicle charger was also switched off around a similar time. The Subway store was later converted into another Greggs store, opening in Autumn 2022.

The eastbound Little ChefHistory soldiered on alone until spring 2017 when Euro Garages purchased Little Chef and decided to close the restaurant later in the year. The site reopened in early 2018 as another Starbucks store to mirror the westbound side. A Greggs store was added in a new extension to the back of the current building in 2018.