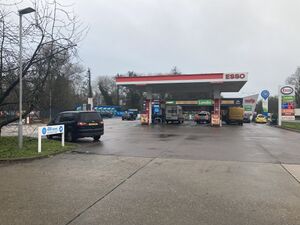 A11 at Fiveways Roundabout

A confusing place if ever there was one. Immediately north of Milford northbound services is the Fiveways Roundabout, where Barton Mills offers motorists a few more places to stop.

The Fiveways site is accessible in all directions from the A1065. It is signposted from the A11 northbound, after Milford.

The entrance to the Barton Mills site is on the main roundabout. HGVs must exit onto the A11 southbound. Cars may exit back onto the roundabout. It is the main site advertised when travelling southbound.

There are no official HGV parking spaces, but HGVs do park on the roads within each site.

Parking within the McDonald's car park is limited to 90 minutes maximum stay and is strictly enforced by Norwich Traffic Control.

To further confuse motorists, there is a Forestry Commission car park with toilets and a snack bar, positioned on the A1065 right by the entrance to the services. That is not an official service area and is the last we'll mention of it. 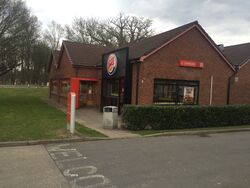 The roundabout was built in the 1960s, with a garage on the roundabout known as Fiveways Garage. It shared the land with properties named Chase End and Hargate.

The road was upgraded to a dual carriageway in 1986. At this point, Forte built a new Little ChefHistory, Little Chef Lodge and petrol station on the opposite side of the roundabout. The petrol station may have opened some time earlier. The main exit from this new development was a link road back onto the roundabout, but for convenience it was also possible to exit directly onto the A11 southbound.

This new development was known as 'Barton Mills services'. After Little Chef gained another branch at Milford, this one became Barton Mills South. It gained a Burger King.

In 2002, the original Little Chef became a Little Chef Choices, gaining a Harry Ramsden's and Caffè Ritazza. These were removed, and the Burger King was then replaced by Coffee Tempo!. Despite Little Chef attempting to sell the unit, the southbound Burger King reopened in 2013.

The filling station has been branded Esso since at least the 1980s and was their last trunk road site before it was sold to MRH in 2015. This included a Snack & Shop store before and after the sale until the shop was damaged by a severe fire in April 2017, thought to have started with an electrical fault in a refrigerator unit, when the filling station was rebuilt reopening in May 2018 with a Hursts Grab & Go store. This was replaced in summer 2020 by Londis.

After Euro Garages purchased Little Chef, they were forced to change the restaurant to EG Diner. They closed the building in summer 2018, and reopened it later in the year with a Greggs and a refurbished Burger King.

Meanwhile, Fiveways Garage was largely unchanged. By the 21st century it had become Enterprise rent-a-car, Mildenhall Car Sales and a valet centre, still with the two properties and still in its old position right by the roundabout.

The existing buildings were demolished in late 2013 and replaced with the new McDonald's Drive Thru and Shell which utilise one connected building. That offer was described as "phase 1", and opened in 2015, becoming the second service area for northbound traffic. The original parts of the Fiveways Garage also remained with a new MOT centre, tyre repair shop and hand car wash all opening in new buildings in 2016. "Phase 2" remains unclear, but Days Inn was named when the project was proposed in 2007.