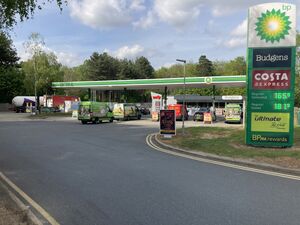 A spacious site in Thetford Forest. 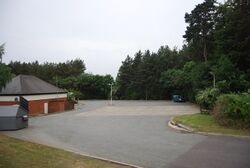 One of the parking areas.

A most peculiar site. When the Thetford Bypass opened, space was left for a new facility near Abbey Heath - westbound being the larger of the two. Two online sites were reserved despite there being two roundabouts nearby.

Despite only holding a petrol station, it was built far back from the road to create a pleasant environment, with a large HGV parking area on each side. The westbound side is particularly large, and includes a private access road to Thetford Sewage Treatment Works and some-sort of disused compound.

When it opened it had two Pace garages, which became Texaco. In 2013, both sites were sold to MRH who planned to add a Burger King Drive Thru to each site, but this didn't happen.

Planning permission for a Costa Drive Thru on the westbound site was granted by Breckland Council in August 2019 although following the merger of MRH with MFG it is expected that this will become a Starbucks if built as this is a more favourable coffee shop brand for MFG. A planning application was later submitted in May 2020 to build a Starbucks Drive Thru on the eastbound side. A decision is set to be made in Spring 2021.