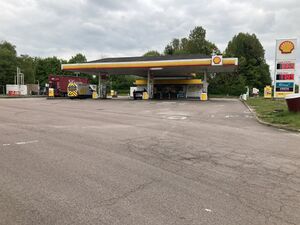 A11 between Thetford and Norwich

A wide range of facilities on the Attleborough Bypass.

No long term or overnight parking is available on either side. 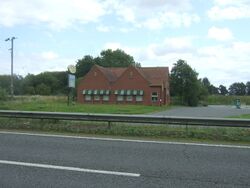 The eastbound side started as a Happy Eater restaurant and a Shell filling station. In 1996, the restaurant became the Attleborough North branch of Little ChefHistory which closed in 2007. The site remained empty for quite a while until 2015 when the site was purchased and refurbished to become the Route 11 Kitchen.

The westbound side opened as the Attleborough South branch of Little ChefHistory alongside a BP filling station in 1989. The Little Chef restaurant closed in 2008 when it remained empty until 2012 when it became Mr D's Diner. The diner closed in 2017 with the building being sold to 23.5 Degrees who opened one of their Starbucks Drive Thru franchises in the building in December 2017.

The westbound filling station previously included a SPAR store until 2011 when the site was purchased by BP Express who de-branded the shop and added a Wild Bean Café. In 2015, BP added a M&S Simply Food store to the site.

In February 2021, Route 11 were granted planning permission to add 5 'travel pods' to introduce accommodation to the eastbound side.